No, this is not my guitar. The owner is my son’s classmate.  I was just asked to replace the strings on this guitar, but I gave it a bit more.  This cute, black beauty, needed some TLC.

As you can see, the High-E string has snapped, but I gave the guitar a few strums anyways to see what other surprises might be lurking for me and the owner.  Despite the guitar being very light weight and having strings that appeared to be at least 2 years old, it sounded very nice and bright with no buzzing. No rattles or creaks when shaken or moved around which meant no major concerns to note so far.  That was good. 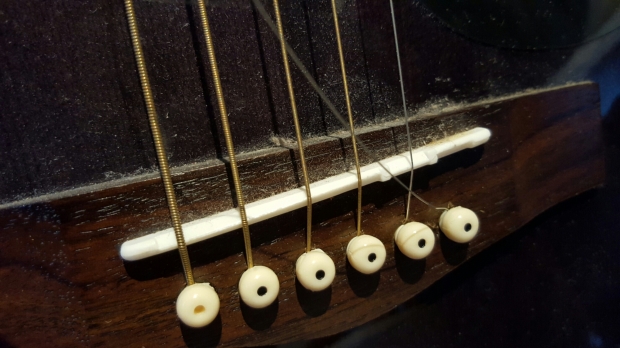 This guitar had not been played for some time due to the snapped High-E string. It also collected plenty of dust during the downtime. Several light dings around the body told me that this guitar was played a lot.  The missing dot on the Low-E bridge pin was from wear and tear – I couldn’t go to the store to buy a replacement pins, but oh well – this added to the character of the guitar.

This appears to be a folk guitar with a full scale length and narrow but comfortable neck. Plastic binding is found around the body. There was a decent attention to detail for this build. If the guitar had a cutaway, I would have taken this as a folk-sized, Jon Bon Jovi Takamine knock-off.

Fina. I have to confess, I never heard of the brand.  Looking at information from the company’s website, Fina has been in business since 1992. I also looked up the website to check out the specs on this guitar (an FF-704).  Despite the bit of neglect this guitar has suffered, this appears to be a nicely made instrument.

I continued to check out the neck of the guitar. The rosewood was really beautiful for an entry level model, but it was clear that it desperately wanted some citrus oil. Some of the frets were lifting ever so slightly off the board, but I didn’t know how to correct that and decided to let the owner know.  Also noted, the action of the guitar was extremely high, so the truss rod needed a heavy adjustment.  Now armed with all the information I needed, off to work I went.  First, I removed all the old strings (which appeared to be a light gauge, after-market variety) and gave the body a good cleaning and a polish. 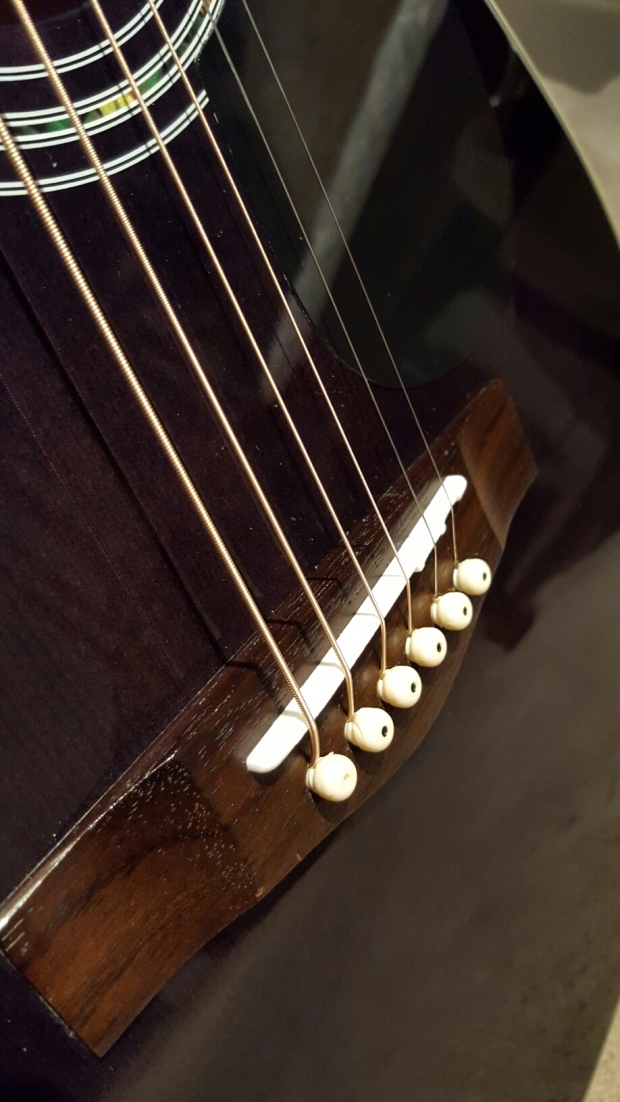 The tuning machines and headstock got as good a cleaning and polish as I could give them. 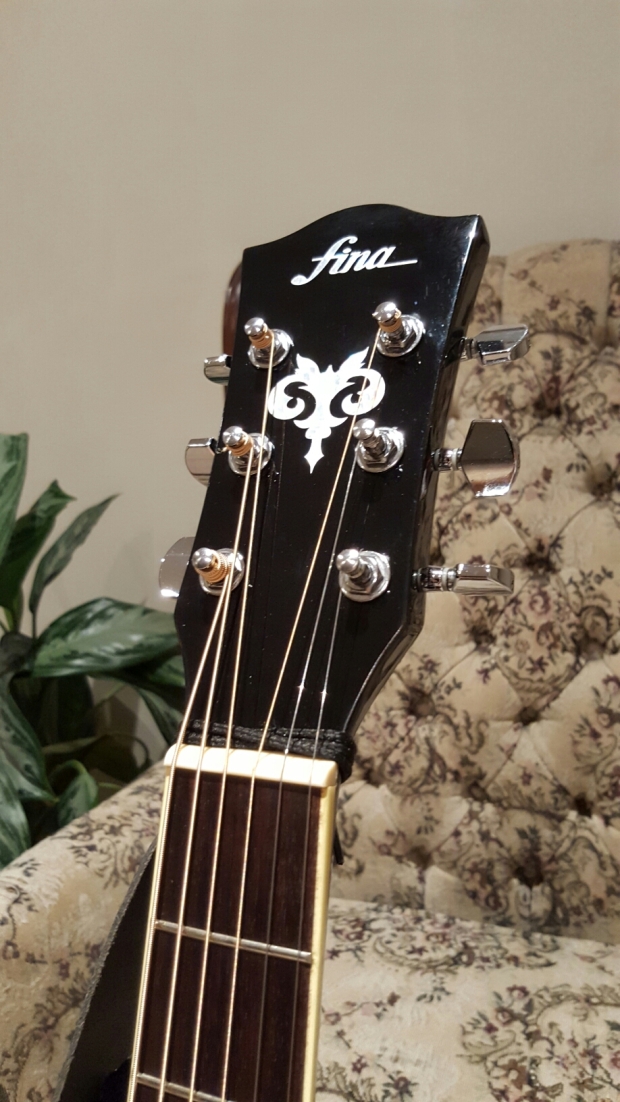 Then the fretboard… After adjusting the truss rod (a full rotation clockwise!) and giving each of the frets a decent polishing, the rosewood board got a generous splash of cleaning liquids and even healthier slurps of citrus oil and Dunlop fretboard reconditioner solution.

A set of D’Addario strings were installed after about an hour’s worth of work.  According to Fina’s website, the D’Addario’s were the OE strings, so the resulting sound should be similar to when the guitar came out from the factory. As you can see, all the pics I took (with my Samsung Galaxy S6, of course!)  were taken after the work was done.  The string replacement was followed by quick truss rod readjustments (to account for the string tension) and the final (third) polishing for the body… 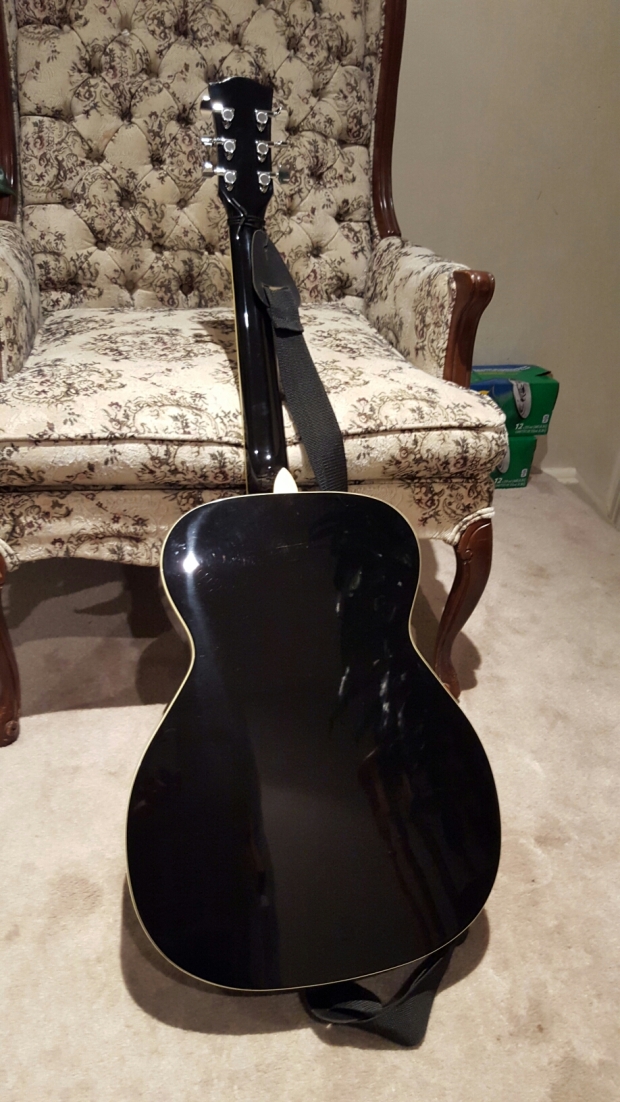 That is as close to a mirror-like finish on the back of the guitar as I could get.  You could see a house plant (which happens to be almost as old as I am) and the railing of the staircase leading to the other floor of my house!  If I had the expertise, I would have been more than willing to put in time to it to remove the dings and scratches. 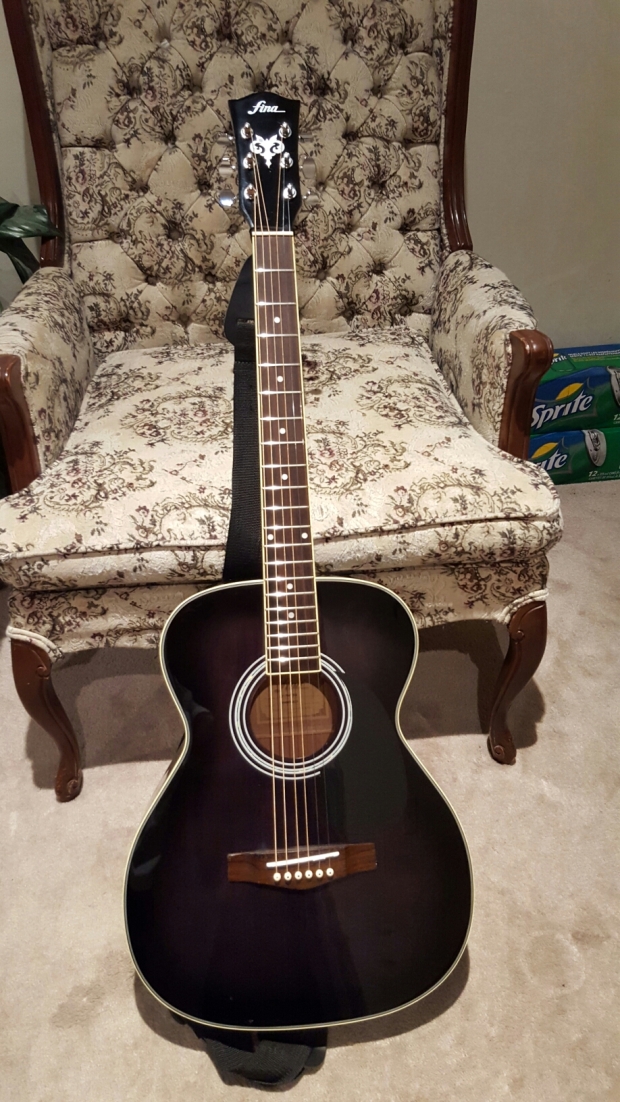 I really do like how Fina made the grain of the spruce wood top show through the black stain treatment.  It is not a solid black paint on the wood, but more like a light “burst” for lack of better words.  Although the grain on each half of the guitar top do not match, the effect is simply eye candy. Now that the guitar has been thoroughly cleaned up and given a fresh set of strings, it plays much better and looks and sounds a lot more expensive. I hope the owner enjoys the fruits of this quick restoration effort.