(Doylestown, PA) – August 21, 2017 –  The Thompson Bucks County Classic roars back into Doylestown on September 10, 2017. The race will crown the men’s and women’s champions of the season-long USA Cycling Pro Road Tour, and the specialist short course series, USA Crits. A clash of styles will be on display for the public as the wily and fast USA Crits racers fight it out with the hardened road riders of the PRT on the crowd-lined 1.4-mile Doylestown circuit.

The women’s and men’s races will be live-streamed to twin jumbotrons and across the internet on buckscountyclassic.com and other cycling related websites.

The famed Doylestown race, now in its 14th-year and boasting an international winners list of racers from Germany, Ukraine, Italy, Sweden and Australia, has always drawn praise from its competitors.

“The Thompson Criterium in Doylestown has always been one of the top races in the country,” said veteran pro racer Bill Elliston. “Between the young, hip crowd, the beautiful and technically demanding circuit, and high quality production values, the race represents everything great in American cycling.”

The nation’s top professional cycling teams will vie to be the first across the finish line and claim their share of the $25,000 (equal for men and women), prize purse. The high-speed battles include a 25-mile race for the pro women and 62-miles for the pro men all on a 1.4-mile racecourse that circles the heart of one of America’s greatest small towns and the famed Doylestown Arts Festival.

“The Thompson Criterium represents true American cycling at its very best” stated Race Director John Eustice, “The high speeds and multi-lap, non-stop criterium action has always been what our country loves the most.”

In addition to the men’s and women’s pro races, the Thompson Bucks County Classic will include a 25-mile amateur men’s race for USA Cycling category 2 and 3 racers, allowing new talent the chance to make their name in a pro race setting; a “high wheel” or “Ordinary”race for antique bicycles; a Cyclosportif offering 31- and 61-mile recreational rides with bicycle valets and a hospitality tent with VIP views of the pro races (registration is limited to 140 riders for each ride); and children’s races that take place on the professional racecourse.

The schedule of events is as follows:

On-course broadcasting will capture the speed and emotion of the races. Spectators will be able to follow the racing live via the twin jumbotrons on the course, and also on computers and mobile devices.  Also new this year, the races will include a series of special sprints strategically placed along the course to insure non-stop action, complete with replays and analysis.

For more information on the Thompson Bucks County Classic and the weekend’s events, please visit: www.buckscountyclassic.com

Men’s Amateur Racers speeding through the streets of Doylestown

As I mentioned in my last article (seen here), the Thompson Bucks County Classic is one of my favorite events to watch in person every year. The action is fast and furious, and every year as the crowds get bigger, the electricity and the energy just gets multiplied with each passing lap. This year there were 4 races that took place. The Amateur Men’s kicked the day off, followed by the Kid’s Races.  Also, the Classic’s first ever Lenape Scorcher Race took place. (the bikes known as Penny Farther, or Big Front Wheels)

And then we have our Pro Women’s, and Pro Men’s. Of course, in the center of all this action was the Doylestown Arts fest. Sadly, Alvin and I were not able to really soak in the Arts fest for one reason or another. It did seem fun, and definitely a lot activity taking place as we walked through the fest a few times to get from one place to the next.

In years past, I really just approached the weekend as a spectator, taking in the sights and sounds. In the last few years though, I have been taken up in capturing the event, trying to share the joy I get when I watch the race unfold before my eyes. END_OF_DOCUMENT_TOKEN_TO_BE_REPLACED

I apologize for taking so long to post since the teaser I put up in Snappy Friday.  My son and I had spent the weekend in the state of Pennsylvania to meet up with our friend, JP.  Yes, a road trip!  I do love road trips!  The reason for this road trip?  It was to try my hand at taking some sports photography, namely, the Thompson Bucks County Classic!

END_OF_DOCUMENT_TOKEN_TO_BE_REPLACED

Alvin, his son Ethan  and I are ready to rock tomorrow’s Bucks County Classic Criterium.

There are just those days when you have good food looking right at you and you just don’t know it until you try.  Yesterday was one of those days for me.

END_OF_DOCUMENT_TOKEN_TO_BE_REPLACED 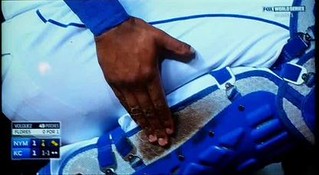 T is for Tar, as in what is suspected to be PINE TAR on the shin guard of Royals catcher Perez.  #LGM  #GOJAYSGO  Enough said.  www.justwroteablog.com   #jwab #alphabetsoup

Don’t know what letter we are on?  Take a look below.  Post your pic on instagram or twitter and don’t forget to tag #jwab and #alphabetsoup.

The New York Mets are the first sports team I ever became a fan of. Let’s go Mets!

This is probably one of my favorite events to spectate let alone shoot.  The last few years or should I say the first 3 years of me watching / shooting this event, I have been more of a spectator than a photographer.  You could also say I got a bit lazy and just wanted to enjoy the weekend.  This year I wanted to focus more on the photography and try to enjoy it as much, and I’m glad I went that direction.  I think I enjoyed it more watching the race unfold through my finder rather than watching and capturing snap shots casually with whatever camera I happen to have available.

END_OF_DOCUMENT_TOKEN_TO_BE_REPLACED

A little more than 2 weeks ago, I had put up a quick pic that I took before the ParaPanAm Women’s Wheelchair Basketball Gold Medal Game – The USA vs. Canada.  Sorry these pics are a little late.

And the gold medal game begins…

END_OF_DOCUMENT_TOKEN_TO_BE_REPLACED

I recently was invited to attend an event at the Rogers Centre which included watching the Toronto Blue Jays (as you may have seen in my Snappy Friday teaser).  It was a great day to be out and enjoy a ball game too, although the skies were much more impressive the day before.  In the past few weeks, I have come to the conclusion that there is something wrong with Penny, so I borrowed my son’s camera (a Pentax ME Super) to see what sort of photos I would get on this day.  Let’s just say, paired with my fisheye lens and a cheap 80-200 telephoto, I was left pretty impressed.  Enjoy the pics I have posted, within.