DEUS EX Has been in my mind lately. So much so that I’ve been focusing on three out of the four of its iterations: DEUS EX Classic, DEUS EX: HUMAN REVOLUTION, and DEUS EX: THE FALL (hereafter referred to as DX, DXHR and DXTF).

Starting with DXHR, which is actually the first DX game I purchased during release, I became intrigued with its world and story as it ranks itself within the Cyber Punk genre, as with DX games in general. Judging from its trailers and gameplay demos it looked like something I’d want to immerse myself in. I did the usual thing that I do when I set myself up for a definite want and preordered DXHR. While waiting for this game to make to my doorstep other things occupied my time. Work, friends, family, and other games filled that time.

Once I did finally get DXHR I put it aside to finish other projects and games. DXHR stayed in the cut. Fast forward to now and it’s still unopened but has been on my mind, among my other games. Lately though, as recent as a few weeks ago, Eidos Montreal and Square Enix decided to release yet another DX outing, though in the mobile landscape, called DEUS EX: THE FALL (DXTF). The lot of DX fans were in an uproar because they would have rather had a full blown sequel on console. To those who did give this game a chance, as I have, will be pleasantly surprised. While I have yet to play DXHR I’ve watch enough gameplay clips to say that DXTF looks, and smells just like DXHR. I’ve been thoroughly enjoying this mobile fanfare since release and its been enticing me to crack open DXHR. I’ve read that much like DXHR, DXTF is also a prequel to the original DX, though it runs parallel with DXHR. The characters are from the novel DEUS EX: THE ICARUS EFFECT (DXIE).

[DEUS EX: THE FALL Turn Table section shows off the character models that can be unlocked as you play through the game.]

I’ve been praising DXTF’s visuals, fluidity, and cover system. This game being played on a touch screen, controls were going to be an initial concern, but once I began playing it my concerns were but to rest. The HUD is thankfully customizable. The only thing I found strange was that there were two Fire buttons, one one each side of the screen. There’s no way to turn one of them off so I just put both on the right end of my screen sitting on top of each other. On the left side I sat my grenade button above the crouch button. I placed each set of buttons just high enough to make room for my thumbs for movement and camera. It’s been working well for me so far. 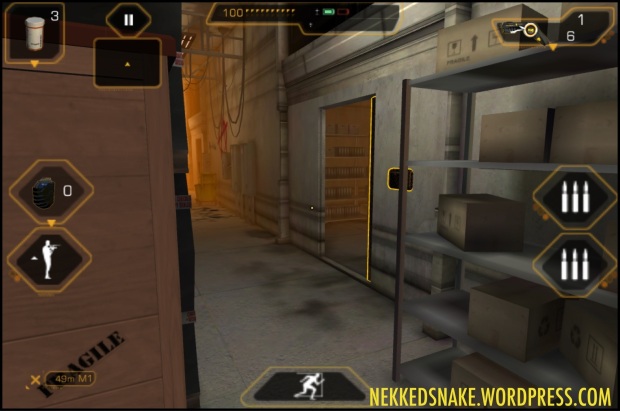 As I’ve mentioned earlier, the cover system is the best so far of any shooter games I’ve played on mobile. The Gameloft games such as the Modern Combat or NOVA series actually have decent touch controls which are also customizable yet people still bitch. Stop nitpicking and just play the game.

What’s also great about the cover system in DXTF is the ability to move corners thru the use of intuitive button prompts that pop up when necessary. It mimics tangible controls as best it can to replicate DXHR gameplay, or any game with a decent cover system for that matter. Players even have the ability to peek thru corners from cover and shoot from cover as well. This harkens back to MGS2, MGS3, and MGS4 and MPO, whose cover system were fun to utilize.

Other in game elements reminiscent of the MGS series include stealth and the choice to play guns ablaze or go the more passive route and be able to best the game without killing a soul. Choice plays heavily in the DX series as I’ve read and found out through playing DXTF. In actuality, the DX series is technically an RPG shooter as every choice you make effects the story in some way so not every play through will be exactly the same. Also, there are items strewn throughout the game that would be beneficial to procure as they can lead to more in game credits to accumulate for better weapons and what’re called Augmentations. Each main character in DX is outfitted with some form of cybernetic enhancements. Whether they’re optical, prosthetic, or cerebral, they all serve to help the player have a better experience. 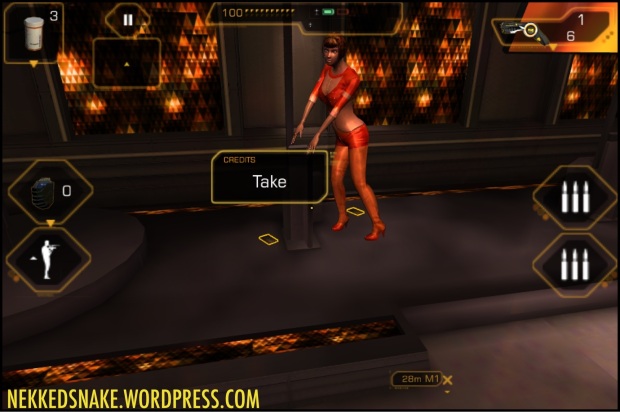 With all the pros I’ve illustrated thus far with my few hours of gameplay there are some very evident cons. The biggest con when DXTF was released was the inclusion of a security measure of sorts in the form of a sneaky DRM which disabled the ability to fire your weapon on jailbroken devices. I’ve experienced this myself and, much like everyone else who also went thru this annoyance, was very displeased to say the least. The most recent update however, did fix that issue and I’ve been able to fire away to my heart’s content. Though the best way to play any DX game is still to be as quiet as a cybernetic mouse. Another con that other players have been experiencing are the multitude of crashes plaguing DXTF. With a pretty game come a pretty big number of performance issues if you’re not using the right device. Though it says that it’s compatible with my iPhone 4S the game will still crash at impromptu moments or even while loading the menu page. Thank goodness the game lets you save and load at literally any point in the game. I liken it to save states for game roms.

[Me successfully running DEUS EX on my MacBook.]

One thing I enjoy doing when getting into a very good game series is to experience the source material. In this case, DEUS EX classic (DX). This game, which was released on PC an later ported to Mac and PS2, is considered a masterpiece of story telling fused with precise gameplay. Having read about all it’s praises, I too, wanted to experience the goodness that encompasses DX, and see where DXHR and DXTF came from. I set out in a mission to get my hands on DX in some form. After a few weeks of searching and testing I finally succeeded in being able to install as well as play DX on my MacBook. I’ve only played the training section and the first level mission but am already seeing what fans have been gushing over all this time. The original DX plays very smoothly, or as smooth as my MacBook with touch pad will let me. The dialogue is interesting so far and makes me want to keep playing to see what’s behind every corner. What’s also interesting is the similarity in HUD design. The way I see it, DXHR and DXTF have taken the original visual design of DX and added their own textures and flavor to set themselves apart from the original DX so it can stand among its predecessor. DX has a darker tone to it, not just in storyline but landscape. I’ve only recently taken a crack at it so there’s a lot more to discover. With the newer DX games the world has a golden hue to it. Tones are warmer and more accessible to newer players which add to the experience. Everything feels futuristic yet not too distant that players can’t relate to the settings in some way.

I suppose you could say that this article is a First Impressions piece on two of the DX games that I’m playing at the moment. Hopefully I will get to open DXHR and experience Adam Jensen’a part of the DX story. For now I’ll settle for Ben Saxon’s exploits as he navigates the world of DXTF.