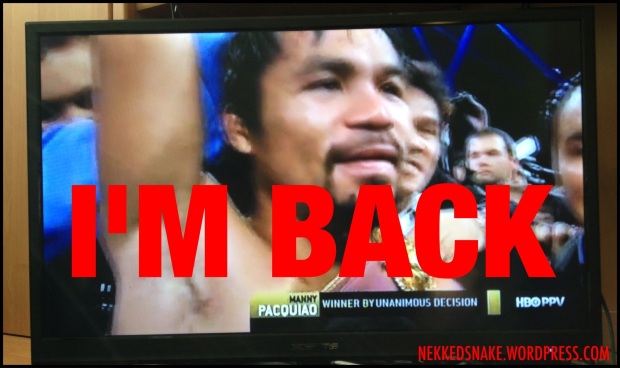 Last night marked a night of fights for boxing fans around the world. Most notably the main event, Pacquiao vs Rios. And while I’m in the Pacman camp for obvious reasons, one being that I’m a Filipino so I’ve got a ton of pride for Manny, and second and more importantly Pacman is a great pound for pound fighter. The former can sound bias, and maybe I am. But the fact is, Manny has great hands, footwork, and most of all speed.

Granted, he’s lost his last few fights, against Bradley by HORRIBLE HORRENDOUS judging (talk about highway robbery), and his 4th fight with Marquez via definitive KO, but the fans still love him. Especially for the Filipino community. Their loyalty has never wavered, as it hasn’t from my end. His fight with Rios was more a one sided victory than a back and forth slugfest. While I give Rios credit for landing a few good rights and a decent left here and there, it was Pacman’s quickness and sniper like skill that peppered Rios’s face with big jabs and even bigger straight lefts. I love a good southpaw fighter and Manny is a great lefty. I’ll throw Rios another bone for toughness, as all Mexican fighters display, but that just wasn’t enough to push Pacquiao back. You can’t bully Manny around in the ring because he will make you pay with 5 shots in 3 seconds, as evidenced in this photo: 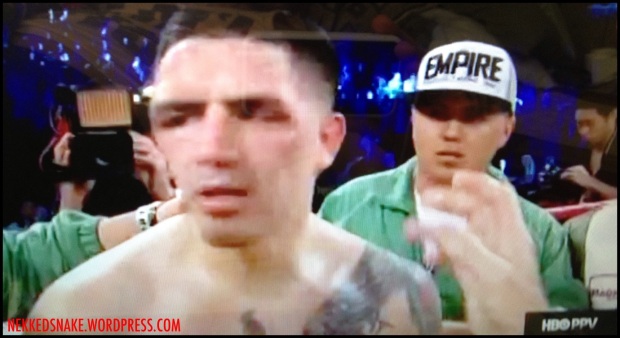 When one commentator asked Rios if Pacquiao treated him like a punching bag he exclaimed, “Whatchoo think?? You saw the fight right? I wasn’t no punching bag.”

The first thing that came to mind when looking at the battered Rios was, “I know punching bags can’t fight back but I didn’t know they could talk back either.”

OK, like I said, Rios had a couple good shots in the whole fight, but all 12 rounds were a unanimous win for Manny. Maybe Pacman didn’t hand him a KO like the fans would have wanted, but Pacquiao is a composed fighter who picks his shots intelligently. His usual game plan is BODY BODY HEAD, but when he sees his opponent’s head swelling and cut up from hematoma serving blows be attacks. With speed and ferocity. 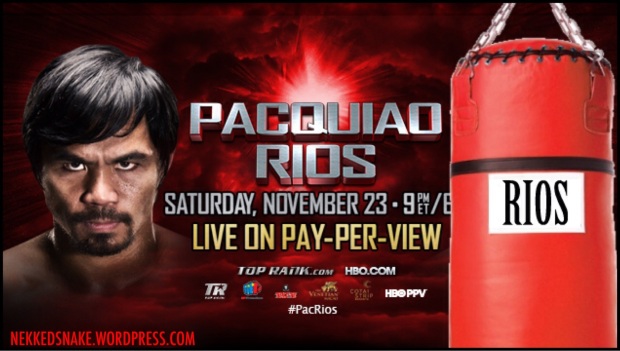 After the fight, Pacman was given the judges nod and the win was in the official books. Manny gave Rios verbal kudos and dedicated this win to all the the people in the Philippines who’ve been affected by the recent storm. This was as much their fight as it was Manny’s. I feel the hunger stirring in Pacman’s belly as he holds the belt. Don’t call it a comeback.