Well it’s not really satisfying but pretty obvious. David Hayter aka Solid Snake aka Old Snake aka Naked Snake ak-motherfucking-a Big Boss, himself spoke on behalf of IGN about the reasons why the recently announced MGS Legacy Collection will not be released on the Xbox 360. Signs point to the obvious caveat that the media capacity of the 360’s current system only being able to run DVD format versus the PS3’s bluray capabilities.

I used to be one of those who wanted to keep the MGS series exclusive to Sony devices but grew up and realized that I shouldn’t be selfish and it’d ultimately be better if MGS were everywhere. And I own a 360 as well as my PS3 and am considering getting the MGS HD Collection on the 360 too. That’s how much I love this series. And you know what they say. If you love it set it free and if it comes back you play the shit out of it over and over again. Or something to that effect. Anyways you can get the full gist below.

In the clip Hayter reads off some interesting facts about Kojima’s decision to exclude any traces of a 360 version. Most notably that a Legacy Collection without MGS4 simply wouldn’t be a Legacy Collection. Good point Kojima-San. 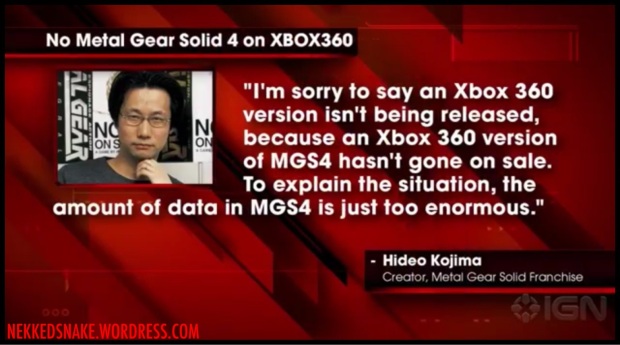 Side note 1: I told Jezzanorris, who put me onto this interesting tidbit of info, that it’s very curious that Hayter himself, was reiterating Hideo Kojima’s explanation of the lack of a 360 Legacy Collection release, given the fact that Kojima has confirmed to the world, and all MGS fans that David Hayter will NOT be reprising his VO role as Big Boss in the recently announced Metal Gear Solid V: The Phantom Pain. It could just be because the Legacy Collection contains all previously released canon MGS titles, save for Portable Ops, which feature David Hayter’s iconic voice work for every iteration of Snake. Curious INDEED, aye Kojima??

Side note 2: For those who keep blabbering that Portable Ops isn’t canon to the MGS lore, I say drink some shut-the-fuck-up juice and research your shit. PO’s lack of advertising bravado as compared with PW media circus shouldn’t dictate whether or not PO is canon when it’s been brought up in MGS4 and PW itself for fucks sake.