So Kojima finally let the cat out of the bag about the MGSV Ground Zeroes exclusive content for Xbox and Xbox One. It centers on a mission, “Jamais Vu“, that players will be sent to, investigating unusual activity on a base (most likely Camp Omega). We can hear Kaz Miller in the trailer talk about “Body Snatchers” and events that are out of this world. But we won’t join Snake on this mission. Instead, Snake himself, appoints a familiar face to the MGS franchise, Raiden! Though, it’s not just Raiden, but MG Rising: Revengeance Raiden, with all his cyborg adornments.

In the trailer Snake presents Raiden with his signature HF Blade, but is also given what looks like an assault rifle, similar to the one Snake carries with him on his missions in previous Ground Zeroes gameplay trailers. This coincides with the gunplay that is demonstrated in the trailer.

[The signature Melon that was used to demo the Zandatsu cutting mechanic in what was Metal Gear Solid: Rising, back when the project was still in KJP hands in 2010. That melon certainly got around.] 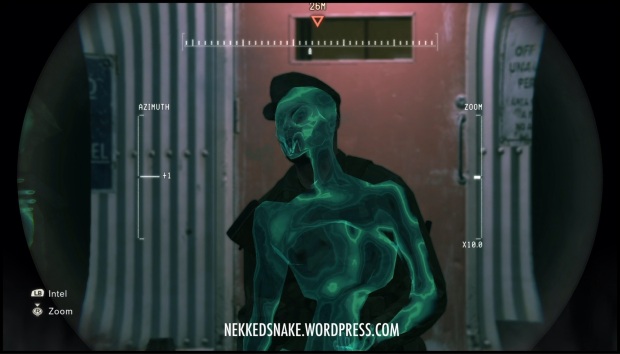 [Spotting some “Jamais Vu” activity going on with an enemy soldier.]

Observe, if you will, the trailer below:

I have to say, this exclusive Xbox content is a few levels better that what Playstation owners are getting. You get MGR Raiden dressed up with Kojima’s proprietary FOX Engine. You get MGR Raiden with MGS style gunplay, not that dinky shooting mechanic that Rising Revengeance is stuck with. You get to run around in a cool sounding mission that deals with FRIGGIN BODY SNATCHERS! For those familiar with Hideo Kojima’s body of work, he’s worked on a cult classic game called Snatcher, which is an amalgamation of movies like Blade Runner, Terminator, and Invasion Of The Body Snatchers. The Jamais Vu mission seems like a loose take on some of Snatcher’s elements and storyline.

What do PS3/4 users get? A blockhead running around a base trying to save a guy (Donald Anderson/Sigint) who we’ve already met in at least 3 prior games. Nothing really new at all. Well, my initial disappointment went from WTF to Meh, anyway. I own both current (last) gen consoles so I’ll be picking up the 360 version of Ground Zeroes anyway. Honestly though, all this exclusivity makes things silly. Kojima is already producing MGS games for BOTH systems. Why break up the continuity with “exclusive content”? IMO Kojima’s seminal series would benefit more if BOTH the Deja Vu mission (PS3/4) and the newly announced Jamais Vu mission (360/One) were on BOTH consoles from the beginning. It would certainly benefit MGS fans, and gamers in general. In each case, those who only own one console will be alienated and lose out on the gaming experience from lack of content. Who knows? Maybe these two missions will turn up as DLC for one another.

It’s time for Jack… TO SNATCH SOME BODIES!