I had the pleasure of roaming around Toronto during the weekend and enjoy some great music, courtesy of two annual music festivals running in town: NXNE and the TD Toronto Jazz Festival.

This was also a great opportunity to try out if the camera in my phone (a Samsung Galaxy S6) was as good as Samsung had advertised.  All the photos scattered in this post were taken with the phone. I’ll say – right now – that if handled correctly, this phone’s camera is downright jaw-dropping! Let’s enjoy reading about both delights.

First stop: The Rivoli to watch Bluebelle. I was disappointed with my first shot, which was blown out (sorry, Erin and Rekha!)

RTFM, Alvin – LOL!  Seriously, I went in blind as most people would (and was “blinded” by this shot!  Eck – corny joke!) This should be, after all, a point and shoot. In most cases, the phone’s camera will handle a situation well, but in extreme cases such as this, the user still needs to step in and take control.  After a bit of fiddling, I discovered pro mode.  This allowed me to take the control that I needed from the camera. Be prepared…

Blue Belle at the Rivoli, with guest guitarist.

Now you see how dark this venue is…spot metering in use. (Samsung has done their homework…Is this an iPhone killer?)

What a drastic improvement, and now I got a chance to enjoy the music and take the photos the way I wanted to!  You can see just how dark the venue was, but there is very little noise in the darkness. The performers also appeared very natural under the stage lighting.  Zoomed in, you start to see the camera struggle, but this is more due to the use of digital, as opposed to optical, zoom.  I got similar results from an iPhone 6 but I found shots from the iPhone perhaps a bit more warm. Is this an iPhone 6 killer in the camera department?  I’ll leave that for you readers to determine.

By the way, NO FLASH was used in ANY of the shots in this post.  (I really disapprove of distracting performers and the audience with a bright flash from a camera up close, without prior permission.) 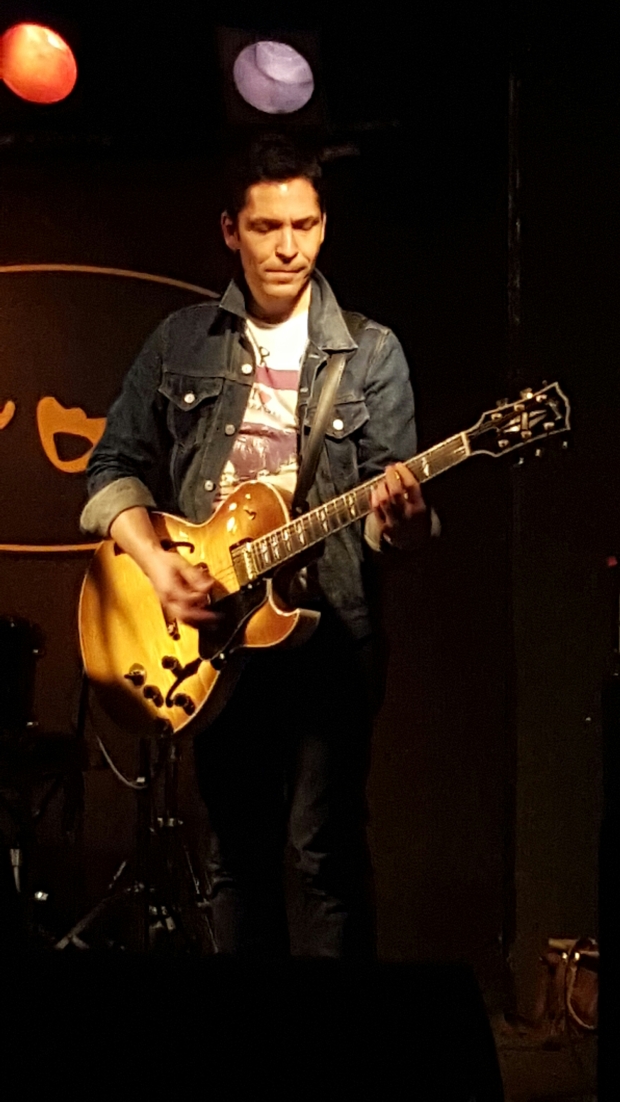 This was a great start to the weekend!  Sweet and soothing female vocals paired with the strumming of metallic strings from “unplugged” guitars – very addictive!

Unfortunately, after this performance, I had to call it an early night – a long night with my son to prep him for his science final the night before had me yearning for the bed.

The next afternoon had me pay a visit to the Distillery District to enjoy a performance by a Canadian jazz drumming great, Norman Marshall Villeneuve (courtesy of the 2015 TD Toronto Jazz Festival) 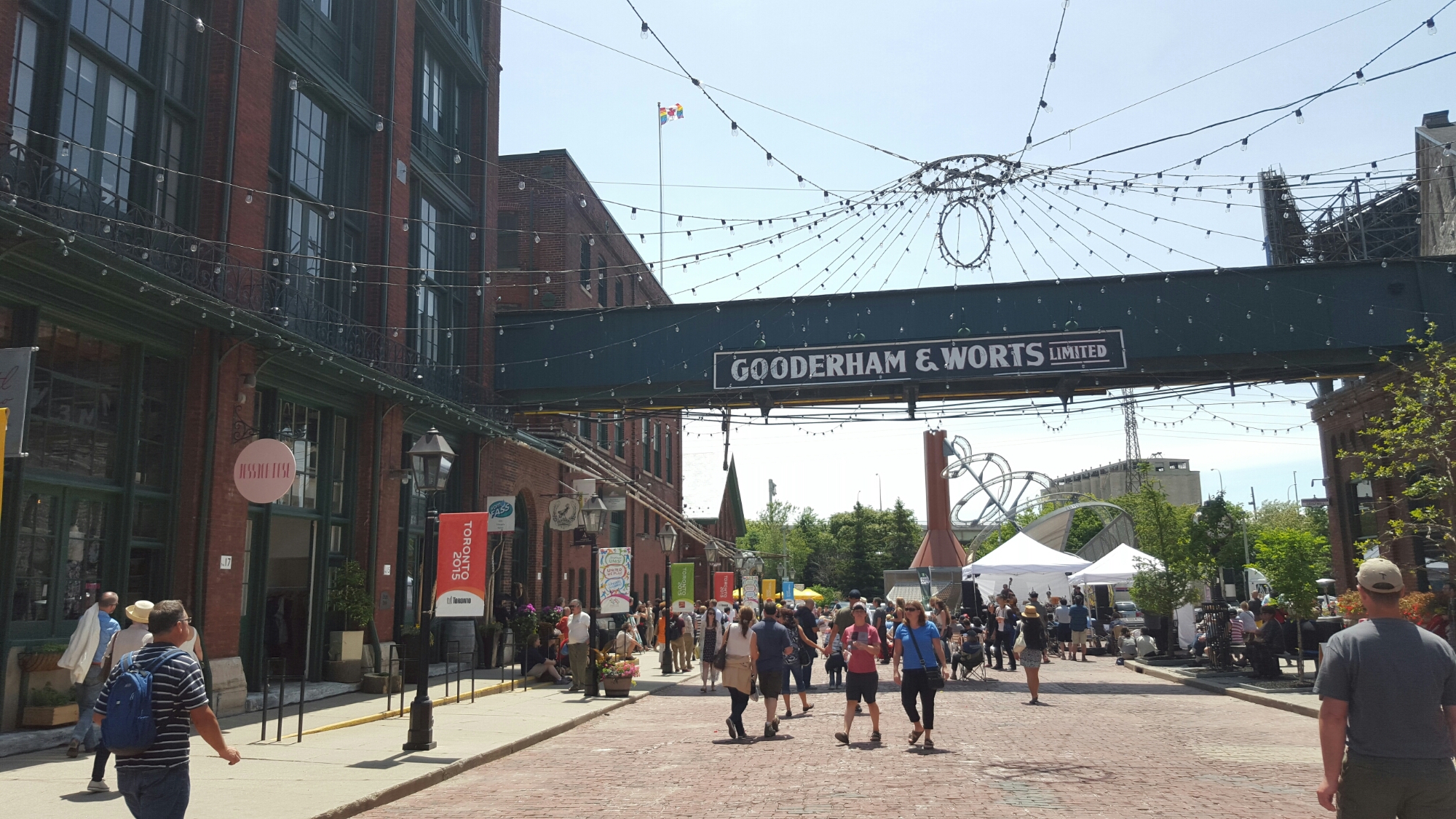 There’s something about drumming that gets me mesmerized – I just couldn’t snap a photo while listening to the lively staccato rhythms emanating from Norman’s drum kit.  The best I could do was walk around the district and snap photos with my phone after his performance.  Auto mode in the S6 handled these situations well, as expected.

This was followed by a quick visit to the Gap near Queen and Spadina, hosting the NXNE Sidewalk Hustle, to watch performances by the groups Summer Heart and Lia Ices. 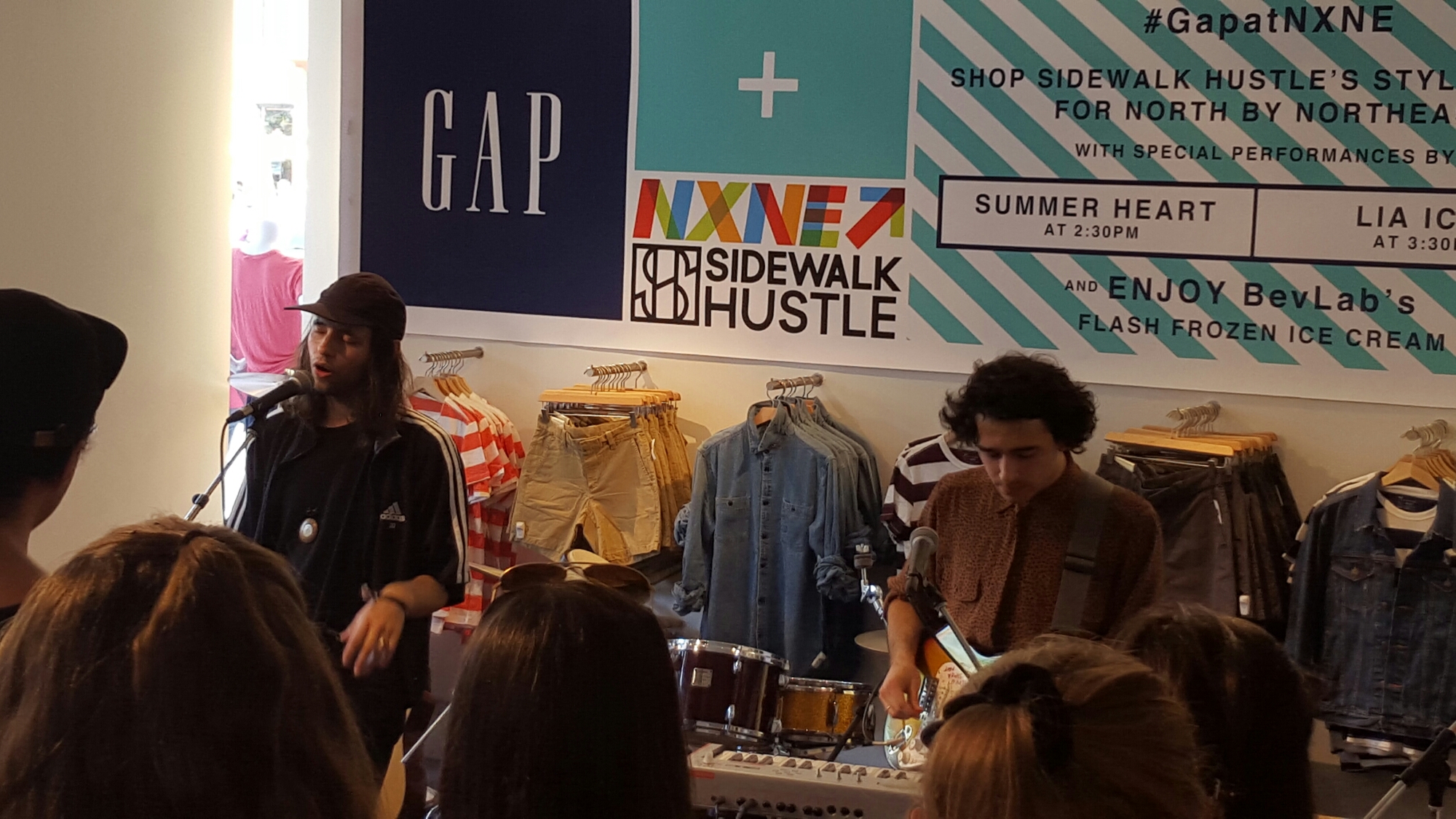 While listening to the great music, attendees at the Gap were treated to free, hand made, ice cream, courtesy of Toronto’s Bev Lab.  The flavor I got: Salted Caramel – YUM! 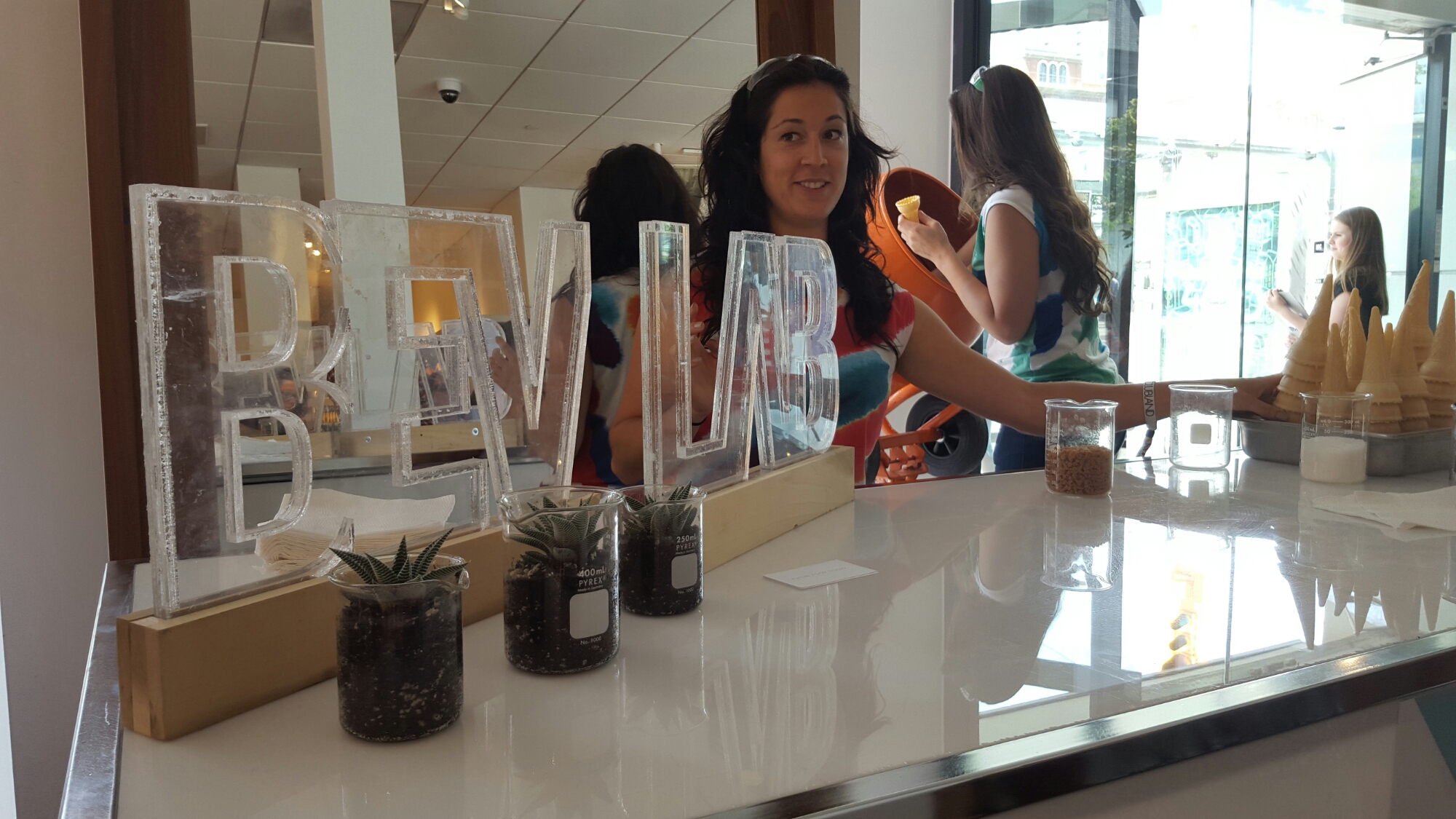 Is that a cement mixer behind the counter? The ice cream was being scooped out of there! 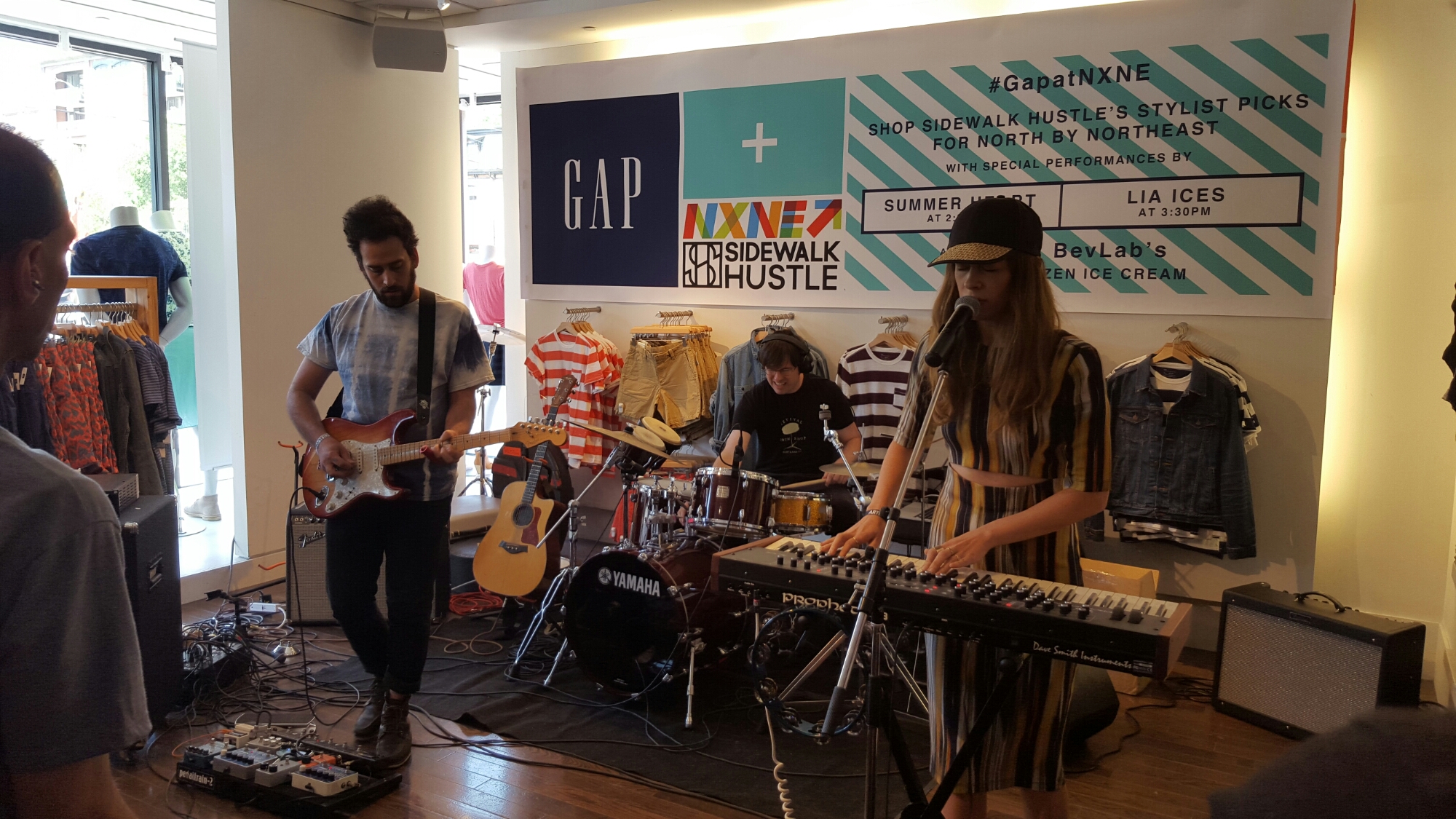 Lia Ices performing their set in the Gap.

The intermission of my day took me away from the city and music: a quick trip to Mississauga to say hello to my cousin and his wife, and to catch up with the rest of the family.  No photos here, so back to the music.

A revisit to The Rivoli to “catch” Paper Aeroplanes.  What can I say, Sarah Howells’ unique voice (not to mention, her Brit accent) will have you hooked!  Where can I find a recording of this live, unplugged, performance? Oh wait…I had a video mode that I didn’t use all weekend!  DOH!  Oh well…a purchase of a CD would have to do. 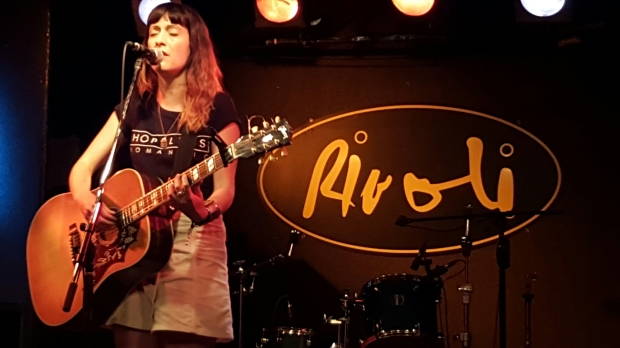 Closing off this musical weekend was a visit to Yonge-Dundas Square to see The New Pornographers.

The New Pornographers at Yonge-Dundas Square

Zoomed in on the action…you can see the camera struggle.  As with all mobile phones, it is much better to step up close and take your photo.

Thanks to the organizers of both of these events running in Toronto – you’ve brought such awesome music and performers from around the globe!  Readers, feel free to click on the links scattered in this post to learn about the bands, venues, as well as these two awesome events that run every year in Toronto!