Last week’s Snappy Friday for me was a photo of Brownie – the name I had given to a Brown (Fiat calls the colour Espresso) Fiat 500 I drove this past weekend while my Jeep Patriot (that I’ve nicknamed Tricia) was in a body shop for a dent repair.  Why did I get this car?  Well the car rental ran out of cars and SUV/CUV’s that were comparable in size to Tricia for the weekend.  I was given this car until Monday and then I would be given a chance to trade up. Read more about what I thought of Brownie by clicking the title or link below.

So, why the name Brownie?  I saw the size, shape and colour of this car and literally thought “two-bite brownie”.  And really – even though this car can handle 2 in the TINY rear seat, this car was, realistically in my opinion, made for 2 people.  I had almost named the car Betsie Brown or something like that because of the license plate. 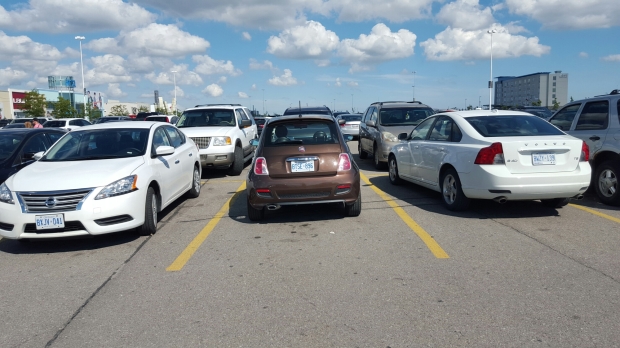 I have to say, this TINY car had tons of character and you’ll learn more about that as you read on.  As you can see in the photo above, this car is TINY enough to park into almost any parking space. About the inside – The cockpit is TINY. The pilot and shotgun seats are TINY, but supportive, cozy, and leather? Or is it leather-like? The hard plastic dash and glovebox (where you will find the USB and radio AUX ports) – TINY.  Even the door cubbies – TINY!  The trunk…you guessed it – TINY!  I mean, how many times can I use the word?  About the only thing that was big on the car was the windshield and the glass around you.  I mean, you have a view!  Then the two doors are probably bigger, in order to be able to squeeze potentially willing passengers into the rear.

Armrests make up for the lack of a centre console. Hard plastics on the dash and trim. Window controls are found by the gear selector.

What cars can I compare Brownie against?  My old 1989 Honda Civic DX 3-door hatch and my brother’s old 1991 CRX Si perhaps had a smaller wheelbase but felt more spacious in comparison (both in passenger and cargo room!)  My father’s 1980 Tercel also felt like it had more space in both departments too.  Mind you, Brownie’s doors and hatch will close shut with a nice, solid “thunk” – that cannot be matched on the 3 older cars I mention.  More modern cars that come to mind? The crowd is big.  First to mind are the Kia Rio and Hyundai Accent. Both are a bit larger in all regards with almost comparable fuel economy, but these cars seem mundane when compared to Brownie, at least when I test drove them last year. Other modern cars that would be compared: The Toyota Yaris, Honda Fit, Nissan Versa and Micra, Mitsubishi Mirage, Chevy Spark and Sonic, the Ford Fiesta as well as the soon to be re-released Mazda 2. Maybe the Prius C could also be considered here too.  Crowded market – indeed.

A nice choice of plastics on the steering wheel make it comfortable to grip. Hard plastics are the name of the game on the dash, although Fiat has tried to make the dash look more expensive than it may be.

As expected from such a small car, the ride was choppy, but surprisingly, not as punishing as that of a Mini Cooper S or a Smart For-Two.  It had me wondering how the Abarth version of Brownie would be like.  Anyways, having not driven the Mini or Smart since I only rode shotgun in each, I can’t talk to how the handling compares to Brownie.  But for the stiff ride (which is almost like a golf cart), Brownie makes up for it when ripping around some curves.  It’s almost comparable to a go-kart and Brownie brought a mischievous grin to my face whenever I had a chance to fling her around.  I hadn’t had as much fun since driving the CRX or Civic!  You might be able to go around the same curves faster in a the Accent or Rio, but I don’t think you’ll have a grin as wide when doing so. 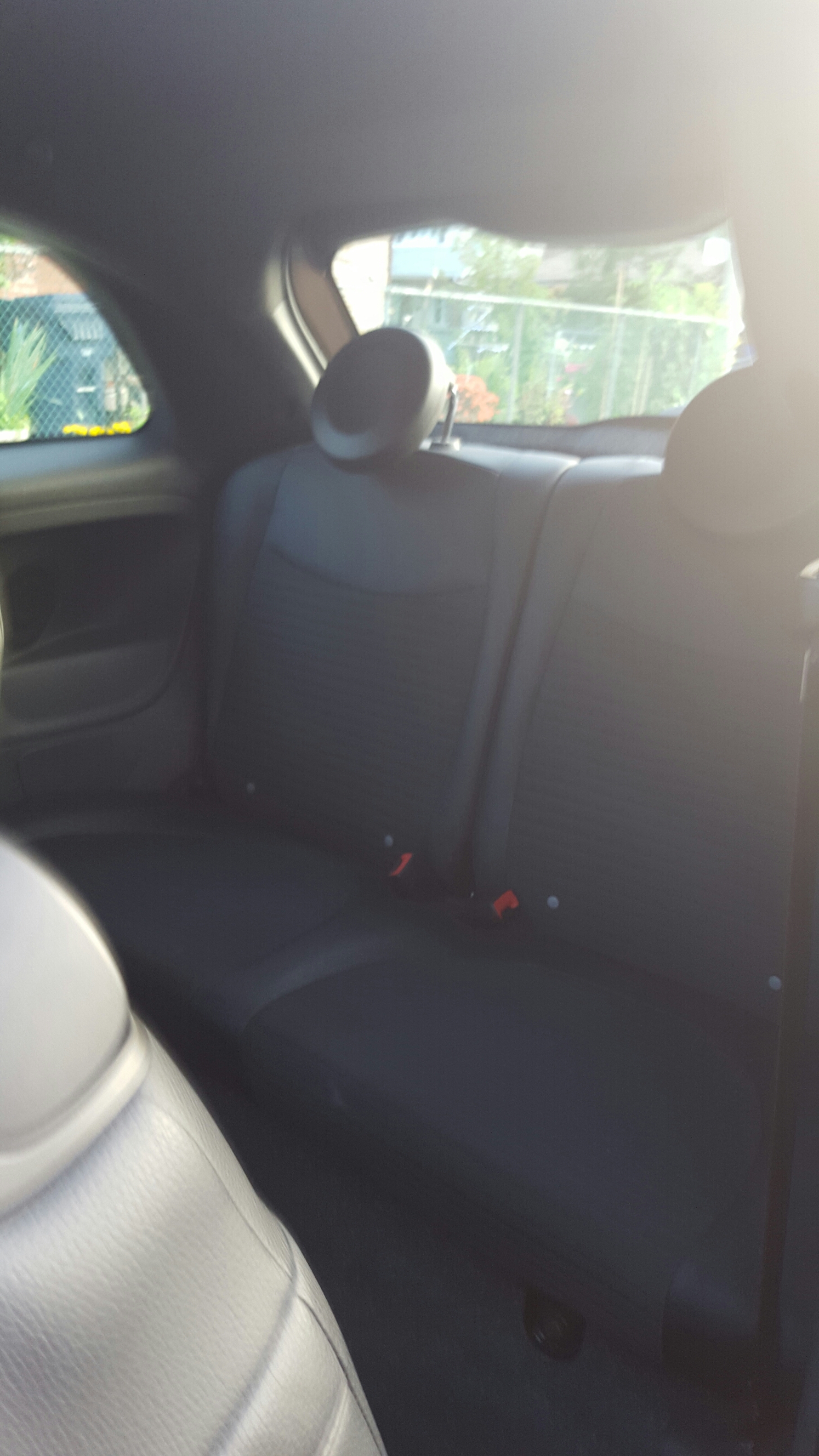 The best picture I could get of the tiny back seats. You might tell that there isn’t much legroom for those who are just a little over 5′ tall, although I was about to say 5 apples…

Brownie’s normally aspirated 1.4 L engine (that can spit at 101 horses) has a surprisingly delicious throaty growl under heavy acceleration. Did I say a 1.4 litre?  Yes.  It’s probably the smallest standard engine I’ve seen in a car in a long time! This car will definitely get out-accelerated by many cars but few cars will bring a smile to your face when you accelerate with gusto.  More surprising, when you are at speed, things are surprisingly quiet – almost civil.  Wind noise is fairly minimal, road noise was acceptable and the engine was gurgling at a noise level at which you can hold a normal conversation with your passenger(s).  Only when you hit bumps is when things get “entertaining”.  You and your passenger(s) may get jostled around and you might hear the bump as it goes through the suspension and chassis of the car. 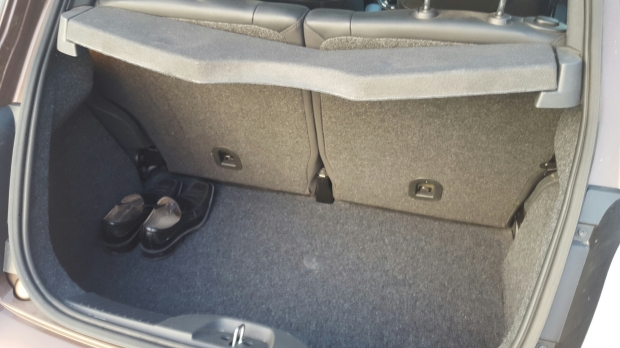 Downsides? Well, other than the choppy ride (which some may actually like) I might consider one – the tranny.  Brownie wants to be flogged – a little in order for smooth shifts.  What I mean is that if I accelerate lightly, the transmission shifts are extremely long, rough and disturbing – to the point that it shakes you and the car.  The shifts are a little harsher with the air conditioner active.  Accelerate at almost normal rates and you will still feel the shifts. Only when you push the loud pedal a little further – there you go – the shifts are smooth and pleasant as you are pressed ever so gently into your seat (at the expense of your fuel economy!  I averaged around 8.2L/100 km in mixed city/highway use.) There was a sport mode available.  I’m not sure if this was for the transmission or for the steering or both, but I couldn’t detect much of a difference with the button active or inactive.

This car comes with a (SURPRISE!) 6 speed auto transmission and it allows manual-like shifting too!

Other negatives?  Ok…If I have to, I would nitpick on certain controls.  First the window controls found in the centre by the gear selector…umm, why?  Especially more so when the less often used mirror controls are found on the door?  Second on the controls topic, are the lack of rotary dials on the radio.  Really?  Up and down buttons for volume – which are TINY?!  (Ok.  I’ve used that word too much!)  And to tune the radio, I don’t remember if it was up/down or left/right.  Thankfully, Fiat took a play from Chrysler and borrowed the volume and tuning controls found on the steering wheels of most of Chrysler’s cars (and my dear Tricia) – this is the radio’s saving grace.

Ok…volume controls are to the left…how do I tune the radio? Up, Down, Left or Right? Argh!

Overall, I think Brownie was meant to be driven like a mini sport car – with some gusto, but not too much.  She doesn’t want to be driven slowly because the drivetrain will punish you with the rough shifts, but also not too fast because the golf cart like ride WILL DEFINITELY punish you and bumps will disturb the car during cornering.  You have to find that delightful “sporty” balance!  Driving in this manner will also reward your ears because this engine wants to be heard by the driver.  What did I say?  Lots of character!  This car definitely brings something different to the table than your ho hum base and mid-level trimmed grocery-getters mentioned earlier.  While Brownie would not be my everyday driver for sure (I’m a more practical kind of guy), she certainly did not bring a frown to my face.  I would have awarded 8/10 for the sheer fun and enjoyment of driving her, but Brownie is brought down to a more humble 6.5/10 because she is just not practical enough for me.  I’m certain she and other copies of her will find many fans.

Hard to figure out the trip computer…it wasn’t controlled by the buttons just to the right, but by a control hanging off the the right side behind the wheel, like the turn signal stalk.

Anyways, I’ll close off this little review about Brownie.  Short pro/con list below.

+ Go-kart like handling brings a big grin to a driver’s face!

+ An engine that wants to be heard paired with a powertrain that both want to be driven with a bit of gusto.

+ Adjust the mirrors right, and I doubt you will have a blind spot.  But don’t take my word for it.

Window controls?  Oh yeah, by the gear selector.  So why are the mirror controls here then?  Hello, Fiat?  This doesn’t make sense!  Door trim…hard plastic, different textures. Minimalist and gets the job done.

– Polarizing styling.  Some find it cute.  I find it MEH!

– Transmission shifts (when accelerating lightly) are rough and disturbing.

– FRUSTRATING control placement for the radio, windows, trip/odometer, and mirrors.

Recommended Driver Type:
Racer wannabe’s who do not want to break a sub compact car budget.

Please leave us some feedback below, like our FB page, or just like this post. It would be better too if you can follow us, so you won’t miss out on stuff you really can miss out on…lol. But seriously, we’d like to know your thoughts, good or bad.