Barrio Restaurant, as seen from the West.

Labour Day is commonly known as the last long weekend of the summer in Canada and the U.S.  Most people head out of town to cottages or to camp.  This year, because I am doing a bit more travel than expected, I stayed in town.
What to do in Toronto?  Well there are plenty of things to do!  The CNE (locally known as “The Ex”) is still running, and for the first time, the annual Epilepsy Toronto Buskerfest ran this weekend at Woodbine Park.  But before heading over to the Buskerfest, my girlfriend and I decided to go to church, then have lunch.

You likely wont forget your visit…the view from the East patio.

After a few moments of indecision about where to eat, we landed at the doorstep of Barrio.  It is a relatively new Mexican restaurant found on the west end of Leslieville, along Queen Street.  The restaurant used to be known as Joy Bistro – we can only speculate what had happened to it, but  Barrio had transformed the space – it looks more hip, modern, and will likely be more appealing to the younger audience who are beginning to move into the neighborhood.

Part of the mural in the east patio.

My first impressions of the place? Barrio put their name all over the place!  I mean it reminded me of how some car manufacturers put their branding all over a car.  At least the placement of their branding was tasteful and didn’t make me feel like I was in a fast food joint.  For example, in the mural on the east patio pictured above, the Barrio name wasn’t so disturbing.  I’m also thankful that only their beer glasses had Barrio silk screened on it.

Barrio on the glass…well it is their house beer in the glass. It was a good match with my food.

More important, what can we say about the food?  I had an off the menu special, called the Barrio burger, while my girlfriend had two tacos: one fish, one braised lamb.  I could not take a photo of her tacos – a wasp had wandered around the table and spooked me from taking a pic (ah, the joys of outdoor eating, and my phobia of stinging insects!)  On top of that, seafood…no touch (due to my allergies.) Anyways, my girlfriend said the tacos were quite tasty.  As for my burger? Who knew that carrots (?!?) would be a good topping on a burger loaded with carnitas, bacon (YES, BACON!) and avocado?  I DEVOURED it. The guest in the table next to me, saw my dish when it had arrived, asked then ordered the same. His burger (and all the other stuff on his plate) did a disappearing act in less than 3 minutes after arrival – enough said.

Yeah, that was one tasty burger…

But I didn’t satisfy my meat fix yet…for some weird reason, I wanted more meat. Ok, let me try the other off menu item: Flank steak taco! 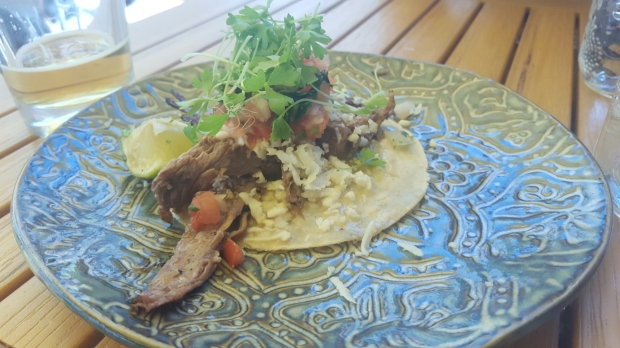 Ok.  The pic above made this dish look a bit ordinary…that was because I had finally figured out how to fix the white balance while shooting.  There was this yellow awning over most of the patio making things look very weird for almost all of my shots, as you can see in the pic of my girlfriend below.  I promise to do a better job in the future. 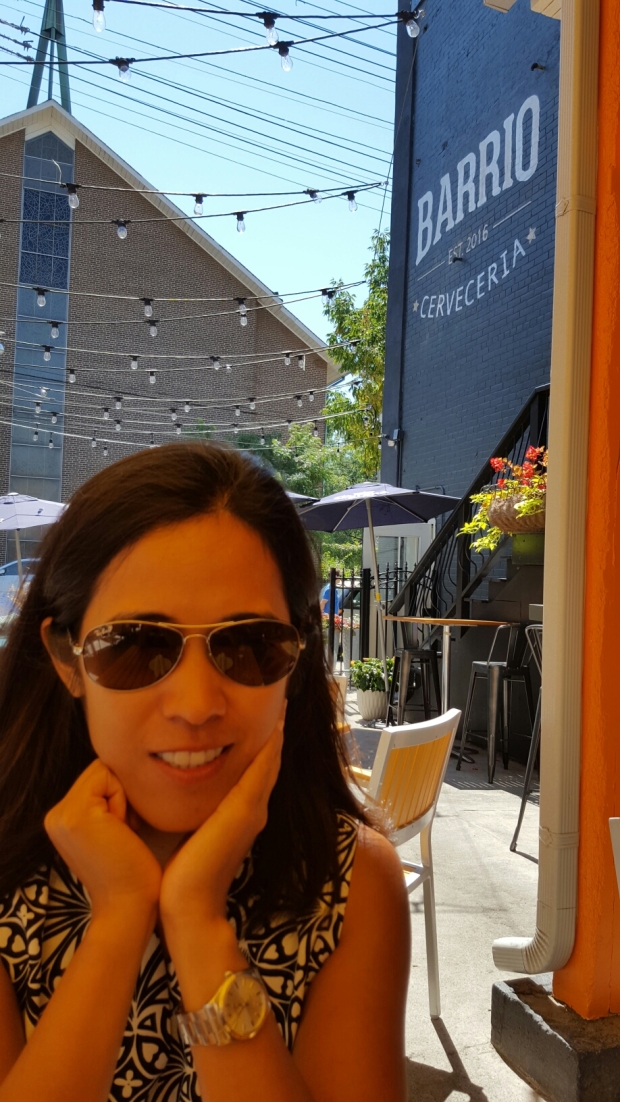 That yellow awning overhead made us look orange! But at least we didnt get sunburn.

Back to the taco. As a lot of people know, flank steaks are finicky – overcook it and you are eating rubber or jerky. How did Barrio do with this steak?  Really well!  The meat was juicy, tender, and yummy!  I enjoyed every bite.

After the great meal, off we went to continue our day.  Thank you, Barrio for the delicious eats!
P.S. If you are ever around the Leslieville neighbourhood of Toronto and want some tasty Mexican food, give Barrio a try!