A nice chunk of MGSV related news made the rounds last week. This all ranging from the opening of the new Los Angeles based Kojima Productions studio, a screening of some new gameplay footage (behind closed doors unfortunately), and more details of one of the prominent characters in the game. The latter portion has already caused much controversy.

The first bit of news is centered on the grand opening of the new KP LA studio. On hand for the shindig none other than MGS daddy Hideo Kojima himself, and art director Yoji Shinkawa because, what’s Batman really without Robin? Also joining the duo was Quiet’s mocap and cgi model Stephanie Joosten.

During the event a gameplay segment was shown to the attendees. Since there was no filming allowed there were just brief descriptions of what was on hand:

• The UI seems to have been toned down quite a bit with the removal of the life bar which we are all accustomed to, coinciding with interfaces like with the Uncharted series. What will happen instead is if Snake becomes spotted or hurt the screen will turn into a reddish hue, signaling the player to duck into cover thereby letting his health regenerate. This seems similar to the likes of current COD or Gears Of War where the same thing happens.

• Snake can use his binoculars to tag enemies which will then appear on his map. This is in like with MGS Peace Walker gameplay where Snake can tag enemies while behind cover to track enemy movement. This feature worked best in conjunction with co-op play as your comrade(s) were also able to see hidden enemies that were tagged. It’s unclear whether co-op tagging will be implemented in MGSV as well.

• The Threat Ring from MGS4 comes back, this time right against the screen instead of around Snake himself. This “Ring” was also used in Peace Walker, though as a Co-Op Ring in co-op mode with a partner. This will probably serve a similar purpose to the Red Screen event where this new Threat Ring tells the player a rough idea of where enemies are hiding or walking.

• Apparently the Radar system, which has been a staple in the MGS series, has also been removed in relation to the new minimalist style of the UI. I surmise that the new version of the Threat Ring will take its place to compensate for battlefield information on enemy whereabouts.

• Action slows down as well whenever Snake gets spotted, giving the player a slight upper hand to handle the given situation. As per the last MGSV trailer that was shown this summer, this can help aid in Snake snatching weapons from his enemies, giving the player a chance to turn the tables to his advantage.

• Vehicles Snake operates will be vulnerable to enemy gunfire. This means tires can be shot and taken out by enemies. 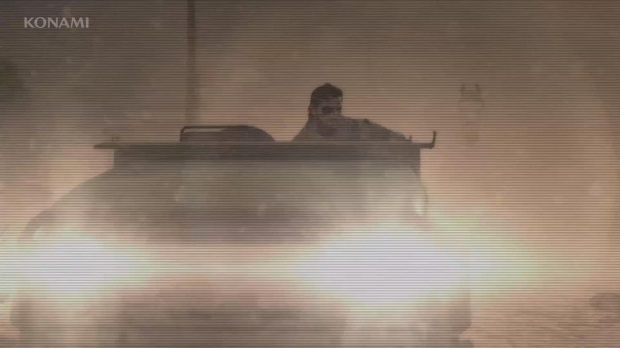 • Snake can take enemies down from higher ground, which sounds similar to how players could grab an enemy while on a ladder in Peace Walker.

• Snake has a new toy called iDroid. It seems this new device will take over as a replacement for the Soliton Radar from previous MGS games. I’m not too keen on the name personally. It sounds like an amalgamation of the iPhone and Android devices. I really hope Kojima changes its name to something better or more suited for the 80’s timeline.

• Interrogation sequences will give players more choices. It seems there will be a litany of questions for Snake to ask while holding an enemy at bay. Again, this isn’t unlike MGS3, 3DS, MPO or MPW where Snake automatically asks a slew of questions during interrogations thru button prompts. This new way of interrogation actually sounds similar to Mass Effect or Deus Ex action RPG style of dialogue where the player is given a few choices of how to ask or answer questions.

As I mentioned earlier Kojima also had Quiet mocap and CGI model Stephanie Joosten on hand for the LA KP ceremony. Joosten plays the scantily clad sniper you see in the photos a few lines up. Below is a clip of Stephanie in the process of getting her likeness recorded for digital processing.

The Internet was all abuzz after catching sight of said photos and were met with mixed feelings. While some are either for her outfit or could care less, the other side of the argument are actually against how she is being portrayed and casts a somewhat negative light on female characters in gaming.

No one though, seems to feel stronger about this than David Ellis, game developer from 343 Industries who helped work on the Halo games. On Twitter he states:

“Don’t care if this gets me in trouble. This character design is disgusting. Our industry should be better than this.”

Futurama’s Fry seemed to have the appropriate response:

I don’t know about the rest of you gamers out there but I feel that this is a bit hypocritical and jumps the gun on the whole matter. Not to undermine how negatively females can be portrayed in any given media, but calling Kojima’s design decisions “disgusting” seems a tad harsh, given the solid fact that a certain female character in the Halo franchise also seems to strike the same balance with Quiet with her barely-there attire. Her name is Cortana. She is the eyes and ears of the Halo grunts and gives players background info of the lay of the land, etc. Cortana barely has anything on, save for a few well placed patches. Even females who Cosplay as Cortana tend to have body paint as their costume. Even her toy is buck nekked. Geez, talk about pots and tea kettles.

And we’re talking about an MGS game here. Yes there is a history of perverse jokes throughout this franchise, half of which have to do with the female form factor, but at the same time there are a multitude of very strong female characters that have graced our tv screens in the past. Off the bat here are some character shots juxtaposed with random cosplayers:

The Boss (MGS3): considered a legendary soldier and mother of the US Special Forces, she developed CQC (close quarters combat with Naked Snake (Big Boss). Snake wouldn’t be who he is without The Boss. 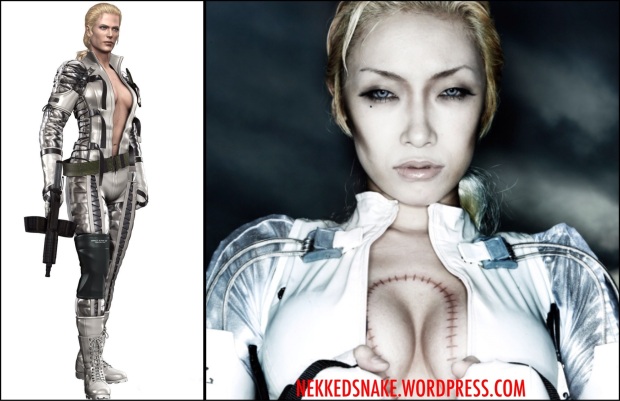 Meryl Silverburg (MGS1): female protagonist and Solid Snake’s main squeeze, she held her own as a Desert Eagle toting, shit talking, no nonsense rookie who caught Snake’s attention with her shooting skills as well as her, um, assets. 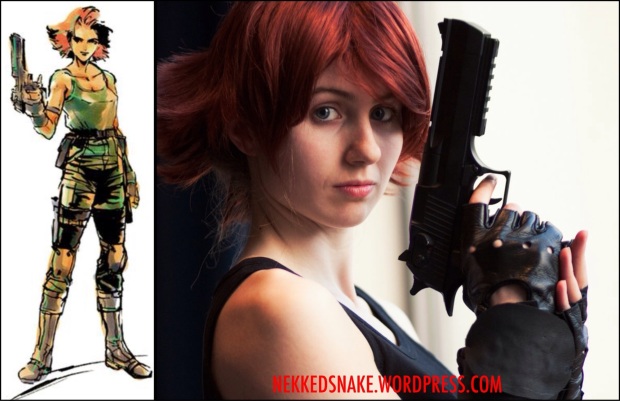 EVA (MGS3): served as Naked Snake’s informant, and pseudo lover, who can stunt ride a side-carred motorcycle, and has a gangster style kill shot with her pistol to boot.

Sniper Wolf (MGS1): this Curdish sharpshooter was one of the bosses Solid Snake had to fend off in Shadow Moses. She’s as badass as they come and damn near killed Meryl just for shits and giggles.

Those are just a handful of the female primetime players in the MGS world who had a ton of sex appeal to match their strengths.

I remember a recent article or comment that actually dealt with why Quiet is a mute character in MGSV. This was also met with some controversy stating that its “sexist” that a female character such as Quiet not have any lines of dialogue in the game. This again, I see as another case of jumping the gun. So what if Quiet hasn’t a line of dialog, if at all, in the game? Tons of characters in other media have been that strong silent type. Granted, most of those roles were characterized by male actors, but who’s to say women can’t convey that same trait? And perhaps there’s a reason why Quiet doesn’t utter a word. Maybe she was injured on the battlefield or during torture, rendering her voice box useless. How about that?

To refer back to Quiet’s attire, there’s a storied reason why she is dressed the way she is which Kojima has yet to reveal. From a marketing POV Kojima states that he wanted his characters, male and female alike, to have a certain level of sexiness to attract cosplayers and toy manufacturers. Not to take away from less attractive characters in the gaming world, but it just happens to be a point of opinion from a game developer is all. Everyone is entitled to their own as is David Ellis. But to judge the appearance of a given character using such abrasive words is off putting and short sighted. Other stigmas point to how differing societies won’t even let females “be sexy” because of the result of objectification. That subject matter though, is for yet anther future article I’ll be working on.

For now this is the current round of MGSV news. I’ll be sure to fill y’all in as more information filters through the internetz.