Infrared Photo of Old Toronto City Hall. I am assuming that the “dark face” of the clock was reflecting little to no infrared light to my camera.

Even before I picked up the Fuji Acros film (mentioned in my last post), I had walked into the Henry‘s Camera Shop down the street from DC and found a roll of Ilford SFX 200 film.  I was intrigued by the box – It was black, with the letters SFX in purple…why is this film different?  So I bought the roll and later that day asked Jon about it…

“That’s infrared film!  Where’d you find that?” Jon (aka Jezza) informed me as we chatted away in our Google Hangout.  I have never shot infrared, so over the next few days the film sat on my desk while I browsed around online for some sample images and ideas. (Insert the “chimp” sounds here as I found some really nice pictures.)  This was going to be fun!  Unfortunately, I couldn’t use Nikki, since she had my first roll of Acros loaded.  Also, the Pentax camera my son uses (an ME Super) had a roll of Fuji Xtra 400 loaded (potentially expired). 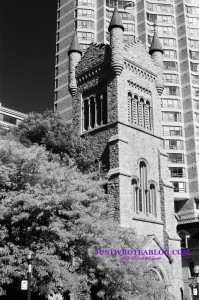 The south tower of St. Andrews Presbyterian Church. To get the really dark (it was a very rich blue) sky in the background, I noticed that I was shooting with the sun behind me. Will try that in my next rolls of film.

But, oh wait…Penny (a Pentax K1000 I had gotten myself a while back – yes, I give my stuff corny nicknames) was sitting somewhere empty!  After 15 minutes of rummaging through my closet…I found her.  It was too long since I loaded film into this camera – I actually had to open up the chamber a couple times to reload because the film had slipped off the winder! (Yes I can see flamer comments coming my way.) 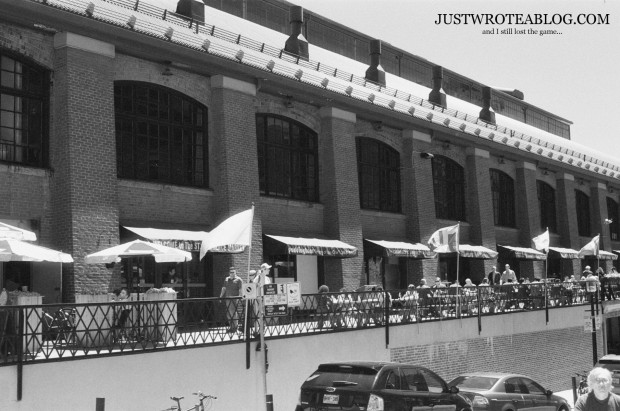 Anyways, with the film finally loaded and this being MY VERY FIRST TIME SHOOTING ANY INFRARED, I thought it would be good to do more research.  Yes – GOOD IDEA!

Let’s list what I did, using what some people call the “7 Stages of Grief”:

All said, with the embarrassing moments dealt with, and the new Red25 filter fitted on my favourite 50 (a Pentax SMC-M 50/1.7) I was hoping to have a successful roll.  I was very impressed.  Shooting with Penny was a delight, and although I had to adjust to seeing red in the viewfinder, it felt like I was shooting with the Delta or Acros.  The results are scattered in this post, with a larger version of a photo available by clicking on it.

Off the top, I can say that I think I may have over exposed the shots, as I could barely recover anything from the highlight areas.  I think this was due to a couple reasons:

If I were to try this roll again, I would go either 1/3 underexposed to avoid a “blow out” (on Penny that would mean my needle would be somewhere closer to the bottom of my “safe zone”) or try the whole roll with a stacked ND filter and/or polarizer to see if I can get more balanced lighting and also get more “pop!” from the sky.  Regardless, the experience was a lot more fun than I had expected it to be!

Please let me know through the comments what you think or leave some tips so I can learn how to improve with my next roll. 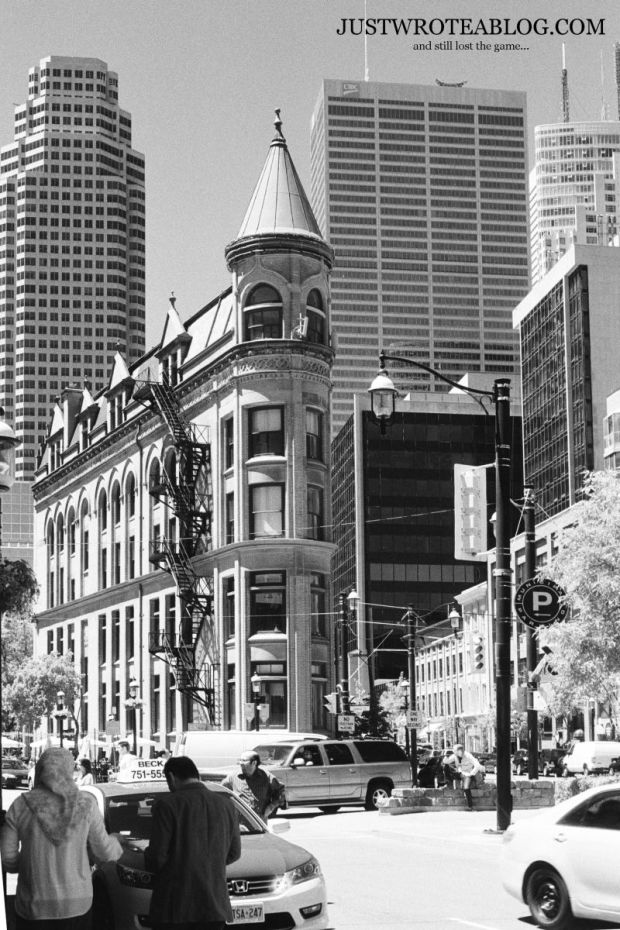 The Gooderham Building, also known as Toronto’s famous “Flatiron.”  This was the second flatiron built on the site (The original was torn down for this to be built.).  The details in the brickwork were blown out on the “sunny” side of the building and could not be recovered in post.  Still I liked the shot.

The Toronto Flatiron is much smaller than the one found in New York City. Completed in 1892, it is 10 years older than New York City’s iconic (and much taller) Flatiron.

The Gooderham building is a counterpoint to today’s glass and concrete of Toronto’s skyline seen in the background.