The only thing I can say about this game at the moment is, wow, that was the best intro/tutorial I have ever done.  The graphics are top notch, the voice acting superb thus far, controls – tight.  I do not have one single complaint yet about this game, but granted I have only played the intro/tutorial.  Below are some choice grabs. (or grabs that I was able to get or remember to get since I was too engrossed on what was going on)

Note: There may or  may not be some spoilers.  You have been warned.

END_OF_DOCUMENT_TOKEN_TO_BE_REPLACED

I waited all day in anticipation for what would be in store for Spike TV‘s PS4 Launch Night. I was hoping to see something really exciting, perhaps jaw dropping from Hideo Kojima‘s little presentation among all the others. Well, I guess I’ll still be waiting because whatever that was Wasn’t what I was expecting.

I was expecting to have my mind blown. Instead, what he treated us to was little more than a throwback to MGS1. His presentation showed an exclusive level in MGSV for PS4 called Deja Vu Mission. This is a PS4 only mission that lets us play as Classic Snake, aka the pixelated incarnation of Solid Snake from MGS1 during the PSX days.

I was amused for 5 seconds but when I realized that THIS was the ONLY THING Kojima Was serving his fans tonight it left me confused and bit annoyed. Usually when Kojima makes announcements they’re pretty worth my while. This time around it left a bad taste in my mouth. This demo was little more than another nostalgic nod to the MGS fans. The thing is, it’s already been done. IN A WHOLE GAME. Which game, you ask? Metal. Gear. Solid. 4. Guns. Of. The. Patriots. That whole game was a tribute to fans. It was drowning in fan service. I enjoyed it. But I’m over it and its been 5 whole years! I thought somehow that perhaps this Deja Vu Mission would show Classic Snake all dressed up with the FOX Engine. NOPE. Same ole blocky mofo. This feels like a missed opportunity at some Real fan service. Kojima could have given ole Solid that next gen shine by actually creating him via FOX Engine specifically for this Mission. Shit, even MGS4 had Young Solid Snake face camo that Old Snake could put on along with Classic Snake face camo.

END_OF_DOCUMENT_TOKEN_TO_BE_REPLACED

Shocking? Yes, very shocking. MGS big daddy Hideo Kojima wants to blow something of ours. No, not that. The other thing. You know, our Minds? As always when Kojima has something big to share with everyone as far as MGS is concerned, Spike TV’s Geoff Keighley always seems to be at the front of the line on his hands and knees. OK, scratch the last few words. See, he’s actually standing in this picture:

Thursday (tomorrow) seems like it’ll be a big day for MGS fans as Kojima will have some PS4 related info that will “blow your mind.” Judging from the increased flood of trailers, gameplay videos, and screen shots I’d hold him up to his word.

We’ll have more info as it washes over the Internetz, so keep it here.

Ok I’ve seen some pretty good cosplay talent before. Some good. Some not so good. Some ridiculously sick.

END_OF_DOCUMENT_TOKEN_TO_BE_REPLACED 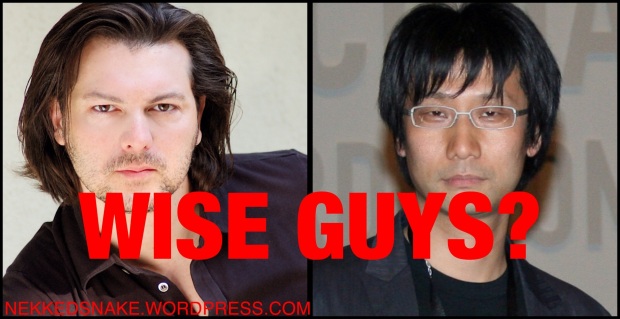 I’m beginning to wonder if all this talk from Kojima about David Hayter not voicing Big Boss is just another elaborate setup just to hype up MGSV even more. Based on the whole Moby Dick Studios and Joakim Mogren trickery, things are starting to smell fishy.

END_OF_DOCUMENT_TOKEN_TO_BE_REPLACED

So far I’ve been pretty perceptive about my guesstimations about MGSV. My latest epiphany brings me back to my assumption that one character in the MGSV trailer and gameplay clips is being voiced by none other than Jack Bauer himself, Keifer Sutherland. I took to Wikipedia and decided to search for Keifer to see what projects he’s currently working on. Lo and behold my efforts proved CORRECT!

You can see Keifer’s other works on this list as well but his newest most current project is in fact MGSV. Another thing I did assume in my previous articles was that perhaps Keifer somehow is also voicing Big Boss. In the gameplay trailer Ishmael refers to Snake as Ahab, another character in Moby Dick, and Snake barely utters a few sentences but yet sounds roughly like Sutherland doing his best Big Boss impression. As I’ve said before, I will miss David Hayter performing the voice acting as he’s done so for over a decade, but I’d totally be up for Jack Bauer running around in a sneaking suit.

Note1: Keifer will apparently be working on MGSV into 2014 as indicated by my screen grab so this could shed some light on a release date.

Note 2: Assuming Keifer really is playing both Ishmael and Snake, this information won’t be reflected in the Wikipedia info I just came across until possibly a much later date to retain the secrecy of Snake’s voice actor.

UPDATE: I just rechecked Wikipedia to see if the info I reported would stick. And wouldn’t you know it, the information on Keifer playing Ishmael has suddenly “Vanished.” The mystery and intrigue are heightening..!