Over the past couple of weeks, I was camping and was also waiting for my first roll of slide film (Fujifilm Velvia 50) to come back from the folks at DC. Due to my ignorance, I didn’t know that it would take two weeks for the film to get processed.  “Oh well,” I said to myself,  “What to do in the meantime?” 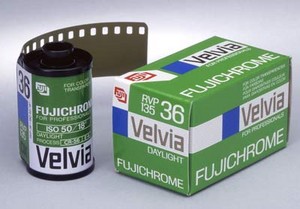 I did manage to grab some rolls of Fuji Superia 200 from the now defunct Black’s Photography stores at a massive discount, so I decided that maybe I should try something different – out came Pentax’ SMC Pentax-DA 10-17mm F3.5-4.5 ED [IF] Fish-Eye (ugh – what a mouthful!), more commonly known as the Fisheye Zoom.

People have always been trying old lenses with their new cameras.  Ever since I purchased Penny, I was always wanting to do the reverse and try this lens out (new lens, old camera body).  But with this lens mounted on the camera, there were a couple problems.  The first was due to the design of the lens.  Being digital, the lens was not designed to shoot a full sized 35mm film frame.  In other words, I was restricted to shooting at 14 mm and longer, or risk vignette or seeing the insides of the lens barrel – I can’t get the full fisheye effect.  I could deal with that.

The biggest restriction that I faced with using this lens, was that I had no control of the aperture setting. To those who don’t know how to handle an SLR, the aperture ring controls the diameter of the opening in a lens that allows or restricts the amount of light that will “touch” the film.  A common analogy I use: think of taking photos with an SLR like that of a trigger on a garden hose and you are filling different buckets. The water is your light and the buckets are your film – the smaller your opening on the hose (aperture, smaller aperture number=bigger opening), the longer it takes (shutter speed measured in fractions of a second) to fill (properly expose) your different sized buckets (film speed, bigger bucket=lower film speed).

So back to this issue of being unable to control the aperture: the Pentax Fisheye Zoom was designed for newer cameras (those which control the aperture in the camera body) and as such, there is no physical ring to control the aperture. Penny, being an older camera, has no aperture control capability – same goes for my son’s ME Super. So, I was stuck shooting at the smallest aperture on the lens – F32. Going back to the garden hose analogy, above, this meant using longer exposures, making handheld shots a challenge.

St. Andrew’s Church.  I think the exposure was a bit under.  This may be due to the meter reading the reflected light from First Canadian Place and the Sunlife building , both in the background centre of the photo. (Velvia 50,14mm, F32, 1/15)

A lot of the problems I experienced was under exposure (or in other words I did not put enough water in the bucket).  I could blame Penny as she could not meter properly – Pentax meters have been known to err on the side of underexposure, but it could also be because I was shooting into the sun a lot of the time.

One thing I did notice – the blue skies from the Velvia, when compared to those from the Superia 200 are like night and day – I really like it!  More to come from my two camping trips later.  In the meantime, please enjoy the pictures! 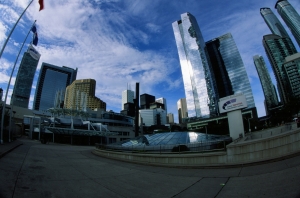