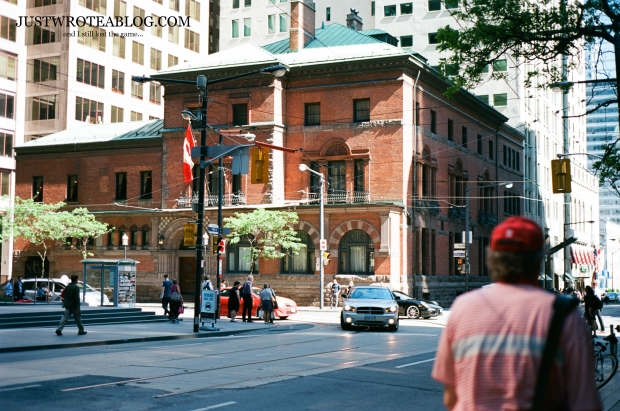 The Toronto Club ( at the corner of York and Wellington Streets.)  Founded in 1837, this is the oldest private club in Canada.  The building, itself, was opened in 1889.

Well I think the title of this blog post says it all.  But I do have a story to tell about this film, if you are willing to read on (and enjoy perusing the photos).

I had been on a rage with black and white photography in pretty much all of my posts to date, until that expired roll of Fujifilm Superia X-TRA 400 had appeared.  That roll of X-TRA had totally whet my appetite to shoot with colour again.  I found myself yearning for some really good colour – actually some WOW!

The main entrance of The Fairmont Royal York Hotel.

The first questions that popped to my mind were, “Should I try out some pro film?” and “Shooting consumer film all my life, what was I in for?”

The former Canadian headquarters of Oracle Corporation. (Shot with Nikki)

Ummm…is this the same shot?  Well yes, but I used Penny with this photo, simply to prove that (given similar settings and similar quality lenses) the film will react pretty much the same regardless of what brand camera you put the film into. Moral of this story (and to quote a YouTube Vlogger): “JUST GET OUT AND SHOOT!”

I was excited after looking at some of Jon’s photos from his post using Kodak’s Ektar (a 100 speed film – you know I love 100!!)  and after a little insisting from him, I convinced myself to grab not one, but, two rolls.  Ok…it is pro film, but it’s not slide film! Why?  I felt I was not quite ready for slide film.  What’s the difference between negative and slide film?  It is the way both films handle extreme highlights and shadows.  I’ve been told that a colour negative film is much more “forgiving” than the colour slide counterparts in this respect.  Unlike colour negative film, you really need to “nail” your exposures with a colour slide film.  I wasn’t quite 100% confident about being able to do that, as you will soon find out.

You saw one side of the Erindale GO Station platform. Here’s the other side…hehehe!

Back to the story, I popped one roll into Nikki (my Nikon F90x) and one roll into Penny (my Pentax K1000) bolted on their respective semi-fast 50mm lenses, and off I went. 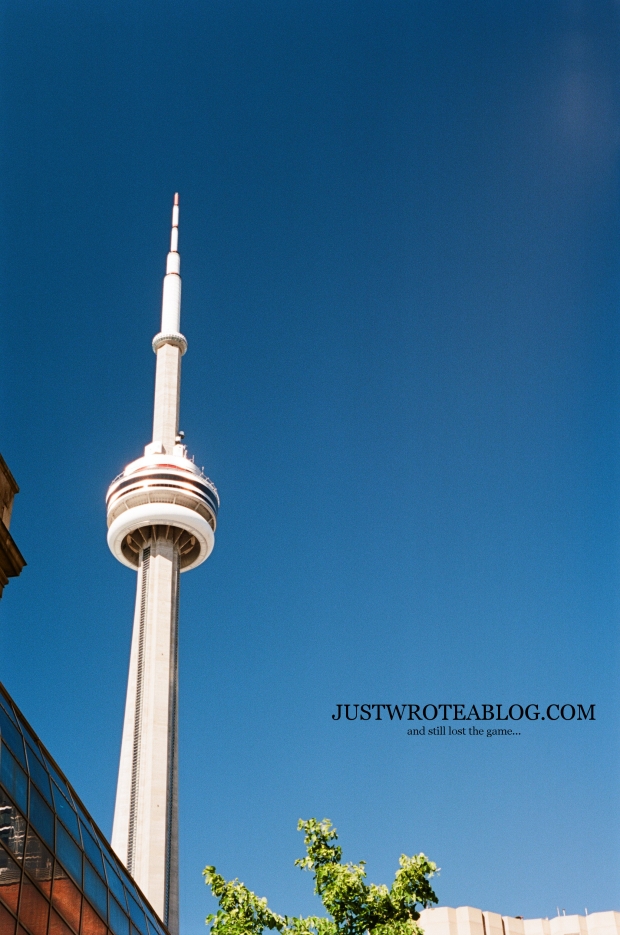 Right off the bat, let me tell you that I pulled a “Jon.”  Yup! After heckling the poor “Big Cheese” for not checking his film speed during our Black and White Challenge (links to the posts: Part I, Part II, Part III, and Part IV)  “yours truly” had failed to check his own settings on dear Penny.  Her ISO had been set to (AN OH MY GAWD AWFUL…) 400, from a roll of XTRA loaded before!!!  That’s a full 2 stops under exposure if I metered my shots properly.  Not quite as bad as Jon’s setting of 400 for the PanF 50 (4 stops! I had to take a dig at him again, HA!), but this was still EMBARRASSING!!  So now you know why I won’t try a slide film…yet!  Regardless of what had happened, I had to let Jon know so that he can have his day with me.  Karma really does come back to haunt you – I find it better to let it happen sooner than later.

The Cathedral Church of St. James 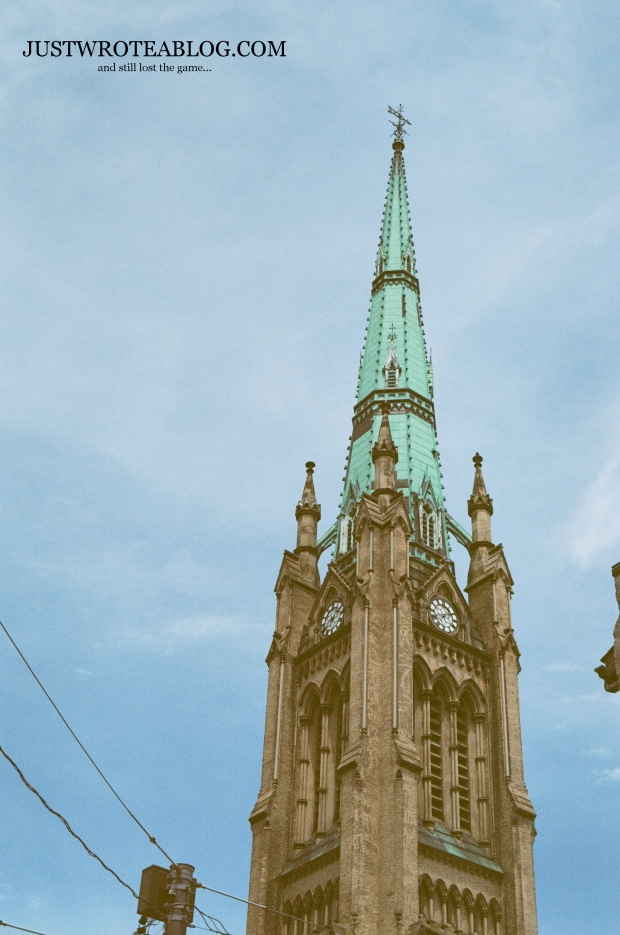 The Cathedral Church of St. James (sadly, shot at ISO 400 but recovered by the labs at DC)

Anyways, after chewing up the rolls and getting them back from my friends at DC, what do I think of Kodak’s Ektar?  I LOVE THIS FILM!  Aside from the many underexposed photos (a couple of which I have shared in this post)  the film is VERY different than its consumer counterpart.  The colours have so much of that “POP!” that I want to see without being overly saturated.

I enjoy finding old vehicles that are still in great condition, such as this 70’s era VW Type 2 (a North American “Kombi Westfalia”)

Nikki has a tendency to ever so slightly overexpose when using spot metering (vs. Penny – she tends to underexpose) but I found that the film handled these tendencies really well.  Even when I purposefully tried to overexpose a shot, the transition to the extreme highlights and shadows are handled very well.  I have a few examples in this post.  The way this film “behaves” is very refreshing for me to see.

Another near disaster, recovered by our friends at DC.

From most of my shots, I noticed that I still have a tendency towards snap-shooting.  I guess this is because of such a limited amount of time for me to walk around from Union Station to work, or during lunch, and then back to Union from work.  I really should find time to slow down and take my time with each and every shot to take full advantage of what this film (and my cameras) can do.

Wandering around the Cathedral Church of St. James, while playing with the depth of field of my somewhat quick 50’s mounted on the cameras.

After reviewing my photos, I took a cue from Jon gave myself a “five minute major penalty: failure to check and adjust ISO/ASA.”  This was a costly mistake that almost cost me half a roll of photos!  So I have to kill this penalty off by purchasing another roll and use it to get some better photos to post for everyone here.  I’m sure I will  have a hard time with this – haha!  In the meantime, please enjoy these photos here and stay tuned!

The Bluma Appel Theatre. It is operated by Canadian Stage, one of the largest not-for-profit contemporary theatre companies in Canada. 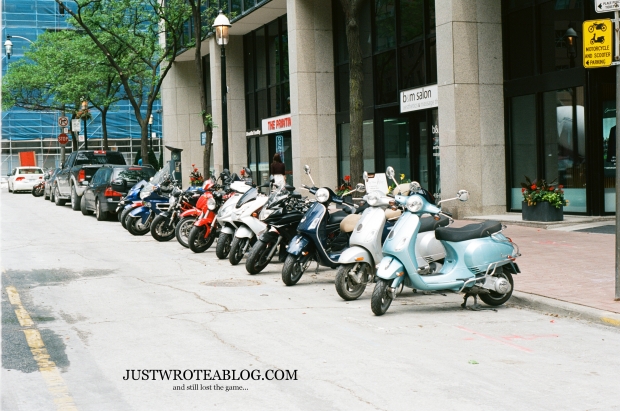 I’m enjoying the colours exhibited from this film.  From the awnings on the scaffolds in the background, to the trees, and the shiny bikes and scooters.

This is a great example of how a camera or film can handle extremes from darkness to brightness.  I still find  many digital cameras having difficulties with scenes such as this, although the gap is closing. Note the building well in the background – you can still read “Canada Life” – with some digital cameras, this would not be readable.  In the darkest part of the photo, you can still somewhat determine that there are two people standing together. 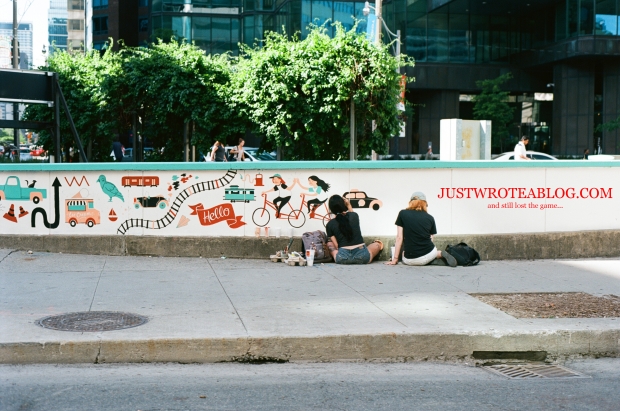 Street artists adding colour to Front Street.  I’m catching myself noticing details such as the vibrant colours (those trees are so green!), the reflection of light onto the worn sidewalk in the forground, the “white” paint cups sitting in front of the “white” background of the painting…just so nice in general.