Some days after work, my brother and I get a chance to unwind by playing League of Legends.  This game was introduced to us by my son a few years ago (I’m guessing around 2011).  To those who don’t know this game,

“LOL” or “League”, as most of the players call it, is a MOBA or Multiplayer Online Battle Arena game and is, arguably, the most popular of its type.  Games of the same genre include DOTA2 (short for “Defense Of The Ancients”), Heroes of the Storm and Smite.

Without getting into too much details, League has 4 different maps, but the map my brother and I most often use is called Summoner’s Rift.  This map is a 5 vs. 5 setup with 3 primary lanes [top, mid and bot(tom)] and a jungle.  The opposing teams have to destroy their opponent’s towers and, ultimately, the opponent’s Nexus.  Players can choose and control a champion.  The champions each have roles as well as different strengths and weaknesses which makes particular champions ideal to play in a particular area of the map.  Most days, my brother and I alternate between ADC (Attack Damage Carry) and Support – both roles typically found in bot.  Other days, we just play any lane.

My favourite support champion has been Thresh.  Pairing Thresh with Vayne (ADC) makes for a very formidable team in bot.  Coincidentally, my brother loves to play with Vayne. 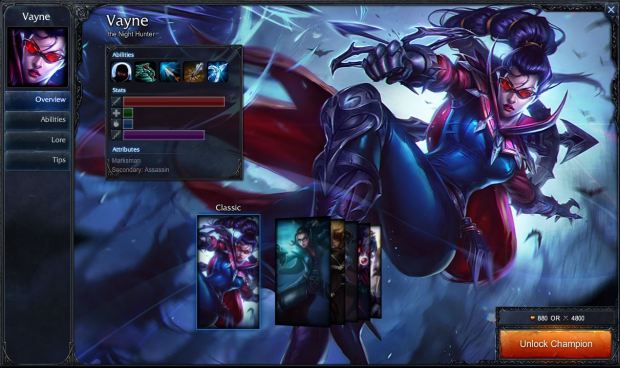 We’ve been playing this pair of champions for a while in custom mode.  But we’ve had our gaps where we would use totally different champions (Morgana and Zyra immediately comes to mind for support, but I will sometimes Jungle Rek’Sai, top lane with Gangplank or mid with Ahri).  A few days ago, I decided to record our games with OBS to see how I can improve my gameplay.  So we decided to use champions that we were most comfortable with.  Having not played with this pair in almost a month, we decided it was time to “refresh” Vayne and Thresh.

Even though I’ve been playing this game on and off for a few years, I’m not a great player, since 99% of the time we play custom mode (Let me add to this: I just got to Level 30 this year!) But, we love playing this game because of the challenge of landing combination plays that result in a ton of damage being dealt to an opposing champion resulting in a kill.  One of these plays I can try to illustrate in the pics below.  (In the pictures below, I am CDNVILLAiN and my brother is Ch1n.)

Typically I try to place myself along a wall or rocks in an effort to attract the enemy close to my position.  When in range, I will press Q (Death Sentence) to launch my hook at the opponent, in this case Kog’Maw. 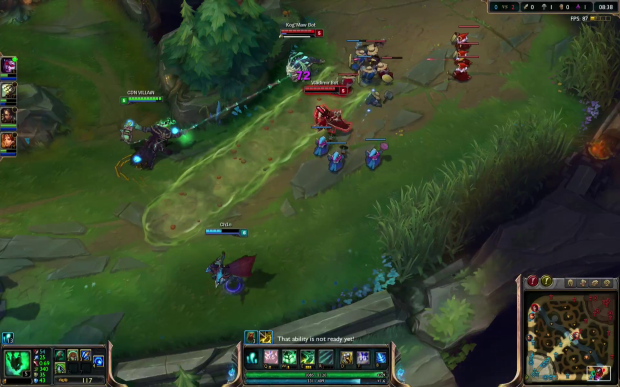 After getting the hook, I will press W (Dark Passage) to throw out my lantern in my brother’s direction.  (The lantern will shield Vayne from enemy damage or, if Vayne takes the lantern, causes Vayne to dash to my position.)  I press Q again to dash to Kog’Maw (an ability that can be done to a hooked enemy) and then E (Flay) to keep Kog’Maw close to the rock. Sometimes, before taking the lantern, my brother will shoot Vayne’s W (Condemn) which should knock Kog’Maw into the rocks resulting in a momentary stun (as was the case, below.)  This should give time for us to deal even more damage to Kog’Maw because Kog’Maw is momentarily immobilized. 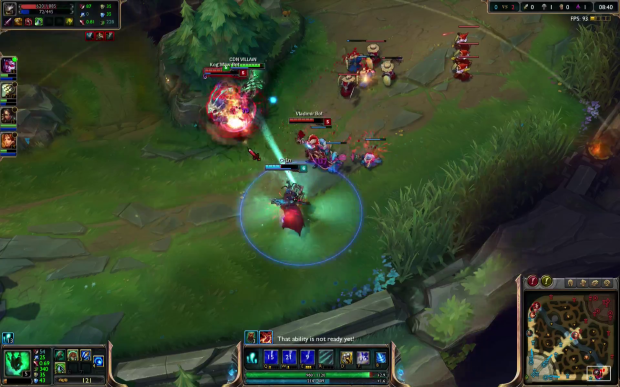 In this sequence, I should have already started walking off to the upper right in order to block the retreating Vladimir, but I misjudged the damage my brother dealt to Kog’Maw and accidentally stole my brother’s kill (kill steals are a no-no for a support!  They need the kills to maximize experience.) If I had successfully flanked Vladimir, I would have made my lantern more useful to my brother. This is because the lantern was still active – Vayne could take the lantern and dash to my position, cutting off Vladimir’s retreat with the two of us and potentially giving my brother a second kill. 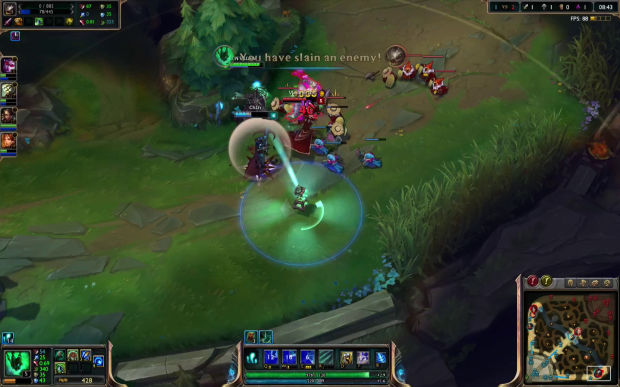 Fortunately, Vladimir stuck around long enough for me to land a hook.  So it is rinse, repeat.  XD 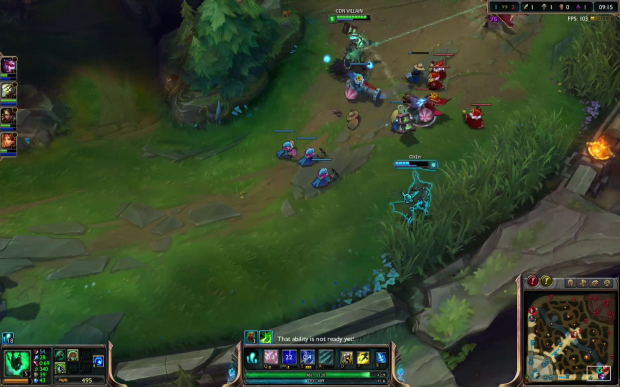 Do any of you “Leaguers” out there have any “wombo combos” or playing tips that you would like to share with me?  Please post up a comment.  I’m looking forward to trying different plays and posting some videos of our shenanigans on YouTube soon.