I hadn’t known about Revoltech until I came across this a few weeks ago while perusing the net. Turns out Kojima is working with them to make a new toy. This one in particular is called Naked Snake 131. Judging from the Sneaking Suit on the figure it’s really Big Boss from the PSP game Metal Gear Solid: Peace Walker (aka Naked Snake from MGS3). Here are a few photos to show more details. 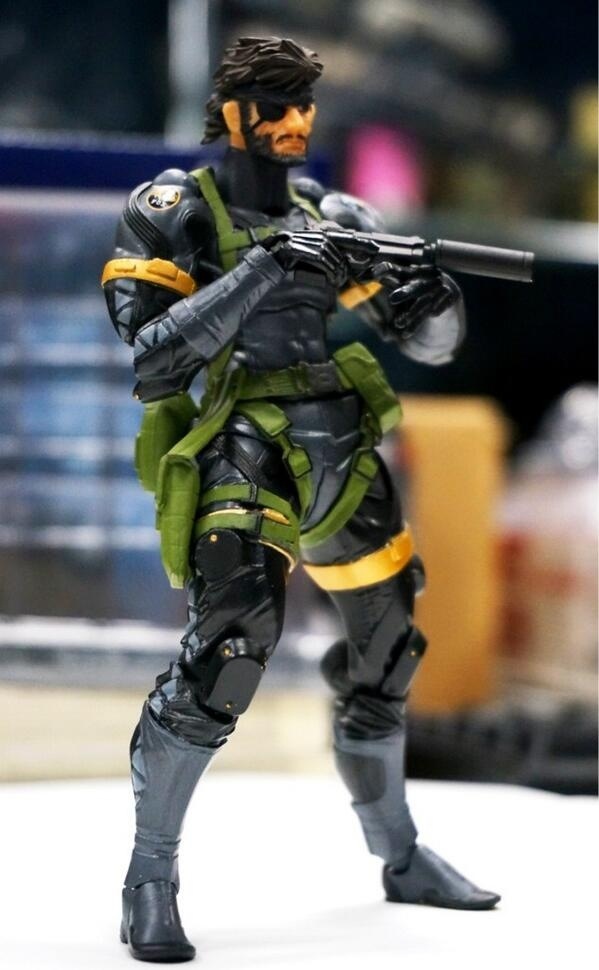 Here’s a comparison shot of my PAK Peace Walker Big Boss Sneaking Suit version next to Revoltech’s ‘Naked Snake 131.’ While my PAK is pretty posable and articulate, Rev’s looks even more so and might be even easier with those obvious ball joints at every articulation point. Knees, ankles, wrists, shoulders, hips, Rev looks like they’ve covered all their bases. Heck, Snake can sit in a box realistically. Awesome stuff.

As for visuals, Rev’s version looks more highly stylized compared to my Play Arts Kai figure. The colors are brighter and the look is more manga/anime on Revoltech’s, whereas PAK takes a more realistic approach. Still stylized, the PAK figure looks closer to the in-game Big Boss character model from Peace Walker. With the Revoltech model I couldn’t help but notice that Naked Snake has a slight underbite. Or maybe he’s just sticking his chin out cuz he smells some rations or tree frogs. Still though, I would like to add this to my current, meager collection of figures.

My small collection of figures. Peace Walker at top, MGS1 at middle. InFlames’s version of Big Boss from Peace Walker called “MetalBoss.” The wife got this one for me! TrueType figures at flanks. (I was attempting to kitbash my own Snake and Big Boss figures but haven’t found time). Some Legos. TMNT nickelodeon figures not pictured.

The release date of these figures is still in question, although signs point to an April/May ETA. My wallet is wide open.