The first. The only. The song that brought christened me into the world of music.

Numb, by Linkin Park, off Meteora, their end-all, be-all best album, no matter how much I love Living Things and A Thousand Suns (and hell, Hybrid Theory and Minutes to Midnight. I love them all).

The Big Cheese, yes, him again, got me to listen to this song when I was quite young. I listened to it all the time in his trooper of a red Dodge Neon.

This needs no explanation. This song… is epic.

How do I follow up with a post about arguably the most famous band of all time?

With my favorite band, of course. Linkin Park has been questioned and taunted and praised and heckled, much like any good band. But they are the sole surviving band of the nu metal era, aside from Korn, who made an album with Skrillex. And we all know how people hate Skrillex.

Blackout is off of LP’s 4th album, A Thousand Suns. I remember the concert The Big Cheese and I went to, and how I had lost my voice to this song. Damn, what a good osng.

Oh I believe, in yesterday…

The Beatles need to be on everyone’s good music list in some way or another (excluding of course, the bad sections). The originators of what I like to call the ‘hot-Brits-take-over-America-by-music’ movement, they definitely make my Top 30 List. My dad was a huge fan of The Beatles growing up, and I’m a fan now, too.

This ballad is so heart-wrenching and genuine, and, it was actually voted Best Song of the 20th Century!

I don’t care what people say, The Strokes have always been a good band, and they consistently make good music, and they don’t give any shits at all. Which makes them rock ‘n’ roll.

Under Cover of Darkness, off their most scrutinized album, Angles, has made it to number 4 on my Top 30 list. The music video for this song truly makes no sense, as none of their videos ever really do, IMO.

The song is stellar, and it actually is one of their top hits on their artist’s page on Spotify.

Here we are, at #5. You know how I told you that none of the songs would actually be placed in order? Well, I lied. I actually do have a set top 5, and you’ll get the songs as my brain saw fit. In order from 5 to 1.

There’s no explanation coming for this one. It’s just fantastic to me.

God, growing up with old parents isn’t too bad when it comes to music if you just accept it. I was willing to listen to anything. Literally, as a child, I was only exposed to music that wasn’t old or shitty Filipino music when I was in a car with JezzaNorris

This though… I remember The Big Cheese dancing to this in DDR in his old house. I remember the epic fails I had at attempting to dance to this.

Listen, and boogie on down. (This was the first music video to appear on BET in 1981)

So far I’ve been pretty perceptive about my guesstimations about MGSV. My latest epiphany brings me back to my assumption that one character in the MGSV trailer and gameplay clips is being voiced by none other than Jack Bauer himself, Keifer Sutherland. I took to Wikipedia and decided to search for Keifer to see what projects he’s currently working on. Lo and behold my efforts proved CORRECT! 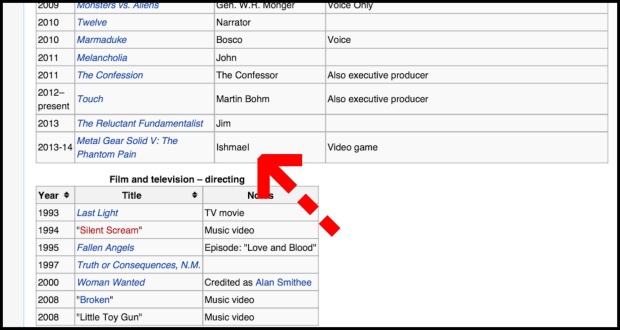 You can see Keifer’s other works on this list as well but his newest most current project is in fact MGSV. Another thing I did assume in my previous articles was that perhaps Keifer somehow is also voicing Big Boss. In the gameplay trailer Ishmael refers to Snake as Ahab, another character in Moby Dick, and Snake barely utters a few sentences but yet sounds roughly like Sutherland doing his best Big Boss impression. As I’ve said before, I will miss David Hayter performing the voice acting as he’s done so for over a decade, but I’d totally be up for Jack Bauer running around in a sneaking suit.

Note1: Keifer will apparently be working on MGSV into 2014 as indicated by my screen grab so this could shed some light on a release date.

Note 2: Assuming Keifer really is playing both Ishmael and Snake, this information won’t be reflected in the Wikipedia info I just came across until possibly a much later date to retain the secrecy of Snake’s voice actor.

UPDATE: I just rechecked Wikipedia to see if the info I reported would stick. And wouldn’t you know it, the information on Keifer playing Ishmael has suddenly “Vanished.” The mystery and intrigue are heightening..!

Metal Gear Solid V: The Phantom Pain isn’t anywhere near one iota of a release date and there’re already many David Hayter fans (myself included) who’re in an uproar about Kojima’s decision to replace Hayter with a completely new VA.

YouTube user theRealAnonymousRain made a video pleading his case to Mr. Kojima about David Hayter’s absence from MGSV. I gotta say, he does make some good points and I agree. Like the one about the Japanese market being able to retain the same Japanese VA for Snake in MGSV. It’s like Optimus Prime not being voiced by Peter Cullen! Where’s the love for the English speaking MGS fans? What’s up with that, Koj?

Hey listen, it’s not like I won’t get the game because the voice actor was replaced. I’m a big MGS/Hayter fan and have emotionally invested in the characters of its rich universe, especially Solid Snake/Big Boss. David Hayter’s voice performance was a huge factor in that. I’m still definitely getting this/these game(s) but I’ll be scrutinizing the hell outta the Rookie’s voice. In terms of MGS he’s probably no 10 year vet. AMIRITE?!

Wolvie, you can relax. I like the new trailer. Makes me wanna watch the whole movie. Happy now? Ok, now put the claws away before you hurt someone, namely me. And breathe, bro. Breathe. Wooosah…

Ah, Linkin Park‘s fifth studio album, Living Things, was a gem in my opinion. My favorite of all of their albums. I said the same exact thing when A Thousand Suns released, but that’s besides the point. I thought Living Things was just THAT much better.

Not to say that any of their albums are bad. LP is still and will forever be my favorite band.

One of LP’s greatest songs, in my opinion. Have a listen.