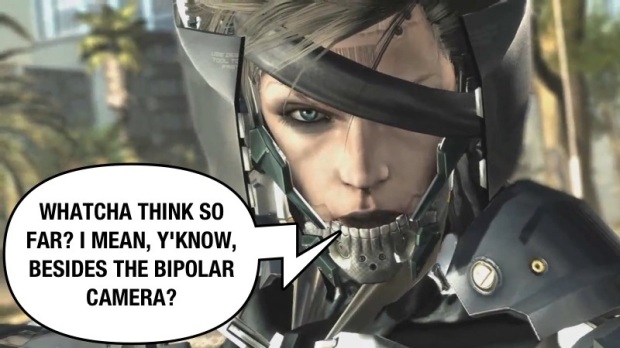 Well, Raiden, it’s been about a week since my initial Metal Gear Rising “mini-view.” I got to squeeze in some game time between my paternal duties. So I should have some interesting updates for the boys and girls.

Last time we touched upon MGRR I went into a little history lesson about the past MGS games and their camera system and control scheme which led me to MGRR’s current setup. At this juncture my view on the camera system still stands. And since there is no way to really customize it in the Options menu AT ALL there’s no point in going further into it than I already have. That being said, I still am currently enjoying the game so that should say something to y’all.

While playing thru the 1st chapter of the game I did my typical MGS thing and try to roam around and explore a little bit, covering every inch of the map. I got used to it because in past MGS episodes there would be items laying around at various points throughout every level. I didn’t feel as accomplished if I didn’t Hoard every ration, suppressor, or cardboard box. I enjoyed the feeling of accidentally stumbling into a PSG sniper rifle or relished finding a set of NVG’s. it was like finding treasure!

MGRR does this in an almost arbitrary manner with God Of War-esque item chests that, just like GOW, you have to slash at to open. Initially it left me vexed but I’ve since gotten used to it. Platinum tries its best to randomize item and weapon location as best they can but ultimately just feels tacked on, probably just to humor MGS fans. People might say, “well this is a spinoff of an MG game.” I say, if you’re going to wear the “Metal Gear” title on your product then you gotta meet certain criteria. It’s not as fun to find an item this time around because, for one thing it’s not as challenging. Back then, Snake had to really dig deep within levels to find crucial items needed for game progression (ie: MGS1 – Colonel Campbell makes you go all the way back a few levels to find a sniper rifle to save Meryl from Sniper Wolf).

Here, once you crack open those chests it’s pretty much the same item; repair unit. Some items though, such as a grenade or RPG can be found laying around some levels or propped up against the wall. And since Raiden has AR (augmented reality) capabilities built into his cyborg frame he can just get a quick lay of the land with a tap of the D-pad UP button. Items, as well as enemies’ silhouettes, instantly become visible even from a good distance. It’s similar to Old Snake’s Solid Eye Patch from MGS4, where items and real time information about people you’re viewing are highlighted. So in essence it makes it easier (almost too easy) to find things.

I don’t know if I’m looking for a Solid experience but other things that MGRR lacks that I wish it had is the ability to crouch, crawl and duck behind objects. If nothing else, I only bring them up for functionality’s sake. I understand that Platinum wants us to see Raiden as always on the offensive, even when being defensive (parry system anyone?).

I just think Platinum tries too hard at times to convey the idea that Raiden should be and is this sword wielding maniac. Raiden could benefit from some actual stealth tactics. Ok so he can sneak up (walk) toward an enemy from behind and drive his HF blade thru said enemy (via QTE) or, from above impale a guard (also via QTE) but that’s really it. The rest is Him chopping motherfuckers up like his life depended on it. Well i guess it does, seeing as ripping cyborg spines out of enemies to replenish his life/energy gauge makes Raiden a happy camper.

QTE’s (QuickTime Events) are also something that MGRR has plenty of. Some gamers are for them and some are completely against them. Pro QTE’ers see them as a means to push the action and cinematic scope of say, a boss fight, to new levels. Anti QTE’ers feel it takes the gamer away from the action itself, seeing as all that has to be done is press an X, O, [_], /_\ button (PS3) or X, Y, A, B button (360) when prompted. I feel that, if done right and is actually functional, I have no complaints either way. The Uncharted series is a perfect example of just the right balance of gameplay, cinematics, and QTE’s. Though in MGRR pressing the O button after cutting bitches up in Blade Mode to watch Raiden rip out those glowing blue spines still never gets old.

As I mentioned before I’ve only cracked the surface of this game but have already had two boss fights. One being Bladewolf and the other being Mistral. Bladewolf seems similar to a former feral foe from a past MGS game. That being Crying Wolf. Part of a four boss crew called Beauty And The Beast Corp, Crying Wolf is really just a former female child soldier who uses the Wolf as an exoskeleton and battles Snake. Bladewolf on the other hand, is all cyborg all the live long day. As both boss fights go, CW liked to hide in the blizzard of the snowy tundra that was Shadow Moses in MGS4. She preferred stalking Snake while using her own back mounted railgun. When not chasing Snake she would open her exoskeleton to aim the railgun, thereby exposing herself for Snake to take a shot. I gotta say, fighting that bitch was scary! Every time, just before she would charge at me she would let out this shrill howl. And then I’d get mauled to death.

Bonus: Once I finally defeated her though, I got to keep her railgun.

Bladewolf is a different story. He prefers to be out in the open, attacking with the ferocity of a jackal, and speed to match. One of his moves is a sort of a lightning fast Psycho Crusher move ala M. Bison. He also has a weapon mounted on his back but it’s not any sort of gun. It’s more like a cyborg chainsaw his tail wields and will then swing wildly at Raiden, slashing thru his armor. Boy, talk about ferocious. When fighting and gradually wearing him down he will call support troops and gekkos to help take you down. Once all his tricks fail you basically tear him a new arse hole via Blade Mode.

As far as boss fights go in the MGS world every one I’ve ever fought has been unique in every way. From Psycho Mantis with his mind reading tricks, rollerblading bomb expert Fatman, godfather of sniping in The End, to the multi tentacled Laughing Octopus, they all had their share of intricate stories and the reasons behind why they fight for their cause. The only exception to this MGS rule was Peace Walker. As much as I love that game to death it could have benefitted from actual maniacally minded humans as bosses instead of tanks and AI metal gears. They were cool to fight and all but there was no story progression through villainous character exposition, the cornerstone of MGS lore.

What MGRR does this time around is marry the two ideas and form a group of half human half machine hybrids called Desperado Enforcement. These handful of cyborg bosses seem formidable individually and as a team. The first one I’ve encountered so far is Mistral with her feminine attributes. She, being the only female in the group has her own set of skills that she showcases in spectacular fashion. I actually enjoyed fighting her because, aside from introducing herself in a very villainy MGS way and preparing her weapon of choice she had me follow her across the map for this boss fight. I typically don’t like boss battles that take too long but I wished that it lasted longer. But I digress.

One thing that MGRR doesn’t do after defeating her though, is go deeper into her back story. I wanted to know more about Mistral’s motives and why she is the way she is. But I guess that’s asking too much of Platinum Games. I probably have higher expectations than I realize.

Having said that, I’m still enjoying the game and pushing along nicely. And it’s still early in the game so maybe things will turn around and get crazier as I progress further into this rabbit hole. What I can tell you though is that, as Platinum pushing this game to be its own thing, it’s close enough to the source material that it doesn’t stray too far outside the lines. Also, cardboard box!